Cromdale is a village in a detached part of Inverness-shire, locally situate in Morayshire and one of the ancient parishes which forms the combined ecclesiastical (and later civil) parish of Cromdale, Inverallan and Advie.

The present small, growing village of Cromdale lies on either side of where the A95 road crosses Cromdale Burn, between Grantown-on-Spey and Aberlour; this bridge[1] is about 500 yards south of the confluence of the burn with the River Spey. 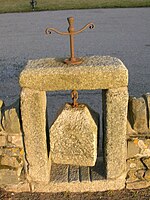 An old cheese press built into a wall opposite the Cromdale Outdoor Education Centre.

The parish church and cemetery are located beside the River Spey at the end of Kirk Road beside the bridge which is the latest of three which replaced the nearby ferry. The bridge was financed by local residents, having been obtained as a War Surplus item from the War Office and erected in 1922 at a cost of £6,889.[2] The remains of an older bridge can be seen a short distance upstream; this (much lighter) bridge was swept away in 1894, the 1922 bridge replaced one that collapsed in 1921.[3]

About halfway along Kirk Road is Cromdale station which closed in the 1960s but survives in private hands along with some preserved railway paraphernalia. It lies on the route of the now closed Great North of Scotland Railway line from Boat of Garten to Craigellachie.

To the South of Cromdale is Balmenach Distillery which was served by a branch line running from Cromdale station that passed under the main road alongside Cromdale Burn.

The old school had become the Cromdale Outdoor Education Centre and stands opposite the Haugh Hotel.

The Battle of Cromdale took place in 1690 on the Haughs of Cromdale, about two miles east of the village.

The village is within the Cairngorms National Park.