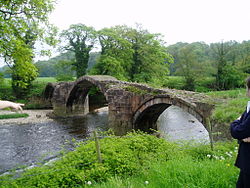 Cromwell's Bridge, on the River Hodder near Hurst Green

Hurst Green is a small village in the Blackburnshire hundred of Lancashire, connected in its history to the Jesuit school, Stonyhurst College. The village is five miles from Longridge and four miles from Clitheroe, and is close to the River Ribble, near its junction with the River Hodder.

With the founding of Stonyhurst Hall, by Richard Shireburn in 1592, the hamlet of Hurst Green (about a mile away) began to develop, as often happened after the building of manor houses. The hamlet's development continued once the college was founded in 1794, and by the early 20th century the village was about the size it is now (approximately 500 residents).

There is a distinctive war memorial to the First and Second World Wars bearing the names of the soldiers from the area who died. This is situated near the village green. At the other side of the green stands the prominent St Peter's Guild Club, a Catholic social club which has existed for well over 200 years.

Shireburn donated the impressive and distinctive alms houses to the village. These alms houses were originally based on Longridge Fell but moved to Avenue Road.

The presence of at least two old bobbin mills bear witness to the cottage cotton industry that was here once. However, this is a community that mainly lives on farming and tourism - with some people working at the local college and many more commuting to local towns.

In the 1970s the village had three shops, but these have gone over the last few years and Hurst Green now has no shops. However, as of 2012 there is a village cafe, Millie's [1], open from Tuesday-Sunday which provides hearty meals and a small grocery section. There remains a thriving sense of community, often centred on the large village hall, St Peter's Catholic Church at Stonyhurst College, the Anglican church of St John the Evangelist, the pubs, St Peter's Club and the football club.

In the village is St Joseph's Roman Catholic Primary School. Like Stonyhurst College the school has a strong Jesuit tradition, was founded by Richard Shireburn and is helped by the Diocese of Salford.[2] The school normally provides pupils for St Augustine's RC High School, Billington and St Cecilia's RC High School, Longridge. The primary school teaches boys and girls from the ages of 5 to 11 years old. Within it is a pre-school that takes children from the ages of 3 to 5 years old. It is reputed to be the oldest and smallest Jesuit school in the UK.[3]

The village has a hotel and public house, partly to cater for the large number of visitors, called the Shireburn, which was named after the Shireburn family who built and lived at Stonyhurst.

For a small rural village, the bus service remains good, connecting Hurst Green to both Longridge and Clitheroe, running in each direction approximately 7 times a day, at two hourly intervals, as at summer 2011.[5]

In 2016 Lancashire Council proposed the closing of the bus route out of Hurst Green. However, this proposal was eventually scrapped due to public backlash.