Tetbury is a small town in Gloucestershire. It lies in the Cotswolds, on the site of an ancient hill fort, on which an Anglo-Saxon monastery was founded, probably by Ine of Wessex, in 681. The population of the parish was 5,250 in the 2001 census.

It is situated in a landscape of gently rolling hills primarily used for farmland, including grazing of sheep and grain production. Its location is associated with a nearby major east-west trade or drovers trail, which would account for its early importance as a wool trade centre. Nearby to the west are Owlpen Manor, Beverston Castle and Calcot Manor. The Tetbury Avon, a tributary of the Bristol Avon, known locally as the Ingleburn rises to the north of the town.

During the Middle Ages, Tetbury became an important market for Cotswold wool and yarn. In memory of this, Tetbury Woolsack Races were founded 1972, in which competitors must carry a 60-pound sack of wool up and down a steep hill, Gumstool Hill, is contested annually. Tetbury Woolsack Races take place on the "late May Bank Holiday", the last Monday in May each year (27 May for 2013).

Notable buildings in the town include the Market House, built in 1655 and the late-eighteenth century Gothic revival parish church of St Mary the Virgin and St Mary Magdalene and much of the rest of the town centre, dating from the sixteenth and seventeenth centuries. The Market House is a fine example of a Cotswold pillared market house and is still in use as a meeting place and market. Other attractions include the Police Bygones Museum. Chavenage House, Highgrove House and Westonbirt Arboretum lie just outside the town.

The parish church is St Mary the Virgin and St Mary Magdalene. There has been a Christian place of worship on the site of St Marys' since at least AD 681. The present church was built following the demolition of the mediæval church in 1777. The church today, with its elegant spire, is a focal point in the town. 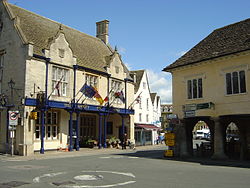 The centre of Tetbury

Tetbury is renowned for its antique and bric a brac shops.The town centre also has a number of independent specialist food and clothing shops, banks, charity shops, estate agents and other shops including lifestyle clothing brand Overider, a branch of the auction house Bonhams and the Prince of Wales' original "Highgrove Shop".[1]

A Tesco supermarket was opened a quarter of a mile from the town centre in July 2002. Despite fears that the supermarket would threaten the existence of the town's main shopping streets, the majority of businesses have survived, and there are a number of specialist award-winning shops selling cheese (House of Cheese), breads (Hobbs House) and meats (Jesse Smiths).

The town has pubs and hotels, including The Royal Oak Inn—which was featured in the 1971 film Dulcima and in an episode of BBC1's Bonekickers—The Priory Inn, The Crown Inn,The Close Hotel, The Greyhound Inn, The Ormond at Tetbury, and The Snooty Fox. The Trouble House is immediately outside the town. Between 1959 and 1964, the latter was served by Trouble House Halt railway station|Trouble House Halt, possibly the only railway "Halt" in England built specifically to serve a pub.

Events include Woolsack Day, held on the last Bank Holiday in May, famous for the races and street fair. A flower show is held at the recreation ground, with classes ranging from children's "Make your own paper plate gardens" to adults "Best flower" and "Best knitting". The first "Tetbury Fiesta" was held on the recreation ground in July 2008, and has become an annual event - a family-friendly community festival of live music and fun, raising funds for local charities.[2] The event for 2013 will take place on 14 July at a new venue - The Great Tythe Barn. Tetbury Music Festival is held in October (3 to 6 October 2013).[3]

Tetbury has won five consecutive Gold awards in the Regional "Heart of England in Bloom" competition in 2006, 2007, 2008, 2009 and 2010 and was category winner "Best Small Town" in 2008, 2009 and 2010. In 2010 Tetbury was Overall Winner of Heart of England in Bloom and won a Judges Discretionary Award for Community Achievement. Tetbury won Silver Gilt as a first-time entrant in the National Britain in Bloom Campaign in 2009 and a second Silver Gilt in Britain in Bloom in 2011.[4][5]

Tetbury has bus services which serve local towns. The nearest railway station is at Kemble. The nearest major airport is Bristol Airport but general aviation uses Kemble Airport at Kemble. The former airfield at Long Newnton (a mile south-east of Tetbury) was originally the home of the Cotswold Gliding Club, which has since moved six miles to the north to Aston Down.

Tetbury is on the A433, with easy access to the M4 and M5 motorways. The A4135 originates in Tetbury and proceeds westerly through Beverston.