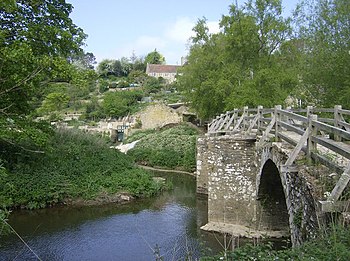 Bridge at Tellisford over the River Frome

The River Frome is a river in Somerset. It rises near Witham Friary, flows north through the town of Frome and joins the River Avon at Freshford, south of Bath.

The name Frome comes from the Old British word ffraw meaning fair, fine or brisk and describing the flow of the river.[1] It is one of several rivers in the western counties by the name of "Frome"

There are many weirs on the river. Several stretches, particularly below Farleigh Hungerford are used for coarse fishing and some trout fishing.[2]

In April 2007 the Mendip Power Group started electricity generation at Tellisford Mill, and it is ultimately expected to produce 75 kW.