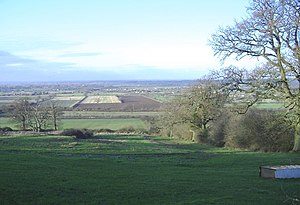 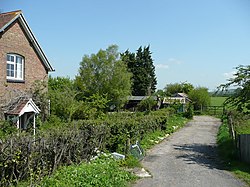 Cottage in the vale

The Dauntsey Vale is a broad, rural valley in the north of Wiltshire. It takes its name from the village of Dauntsey in the centre of the vale.

The vale is characterised by a wide flat clay flood plain of the upper reaches of the River Avon, which divides the Cotswolds to the west with the chalk downland of east and south Wiltshire to the east.

It is unusually triangular in shape with the north edge running from the town of Royal Wootton Bassett in the east to Malmesbury in the west. This prominent north ridge is the setting for the village of Brinkworth, which at five miles long, claims to be the longest village in Britain.

The eastern edge of the Vale is more pronounced, with a steep and high hill forming a ridge running from Royal Wootton Bassett in the north to close to Calne in the south. This ridge top provides the location for RAF Lyneham, the home until recently of the RAF's Hercules transport planes.

Agriculture and land use

The Dauntsey Vale, with its wet and lush green fields, is traditionally dairy pasture land. It was once a major milk and cheese producing area. Today, much dairy still survives but is increasingly being replaced by arable farming, some sheep grazing and especially equestrian use.

With its flat and steady descent, the Dauntsey Vale has since the Industrial Revolution been used as a major route to cross southern Britain, providing a manageable descent from the chalk highlands of eastern Wiltshire to Bristol and Bath below.

The new route so to use the Vale was the Wilts and Berks Canal, whose course hugged the foot of the eastern ridge.

Brunel then used the Vale for the first Great Western Railway line from London to Bath and Bristol, which was followed by the line to Monmouthshire and Glamorgan in 1901, which splits from the original line at Wootton Bassett.

Finally, the M4 motorway descends across the Vale from north east to south west, and cuts through the lesser eastern Cotswold scarp at Stanton St Quintin.

Maud Heath, a 15th century widow who lived at East Tytherton, near Chippenham. She walked to market every week in Chippenham and amassed a small fortune. With no descendants she ordered that her money be spent building an elaborate and lengthy causeway from her village to Chippenham to provide a safe and dry route. Much of Maud Heath's Causeway still survives, particularly where it crosses the Avon. A statue of her was erected on the eastern scarp overlooking the vale above East Tytherton in the Victorian period.