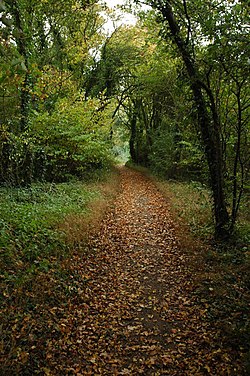 The Oxfordshire Way between Charlbury and Stonesfield

The Oxfordshire Way is a long-distance walk in Oxfordshire, with six miles in Gloucestershire. The path links with the Heart of England Way and the Thames Path.

The path runs for 68 miles from Bourton-on-the-Water in Gloucestershire (51°53’6"N, 1°45’29"W) to Henley-on-Thames in Oxfordshire (51°32’17"N, 0°54’21"W) and this passes from the Cotswolds to the Chiltern Hills, with hilly sections towards each end and gentler country in the middle sections. It is reckoned that the walk should take between four and six days to complete.

From Bourton-on-the-Water to Kirtlington the path forms part of European walking route E2.

From Islip the path runs by Noke, Beckley and the southern edge of Bernwood Forest to Waterperry. It then passes through Waterstock, Tiddington and Tetsworth. Across the M40 motorway it passes the small settlements of Adwell and Wheatfield, then after a glimpse of Shirburn Castle it reaches Pyrton.

From Pyrton the path crosses the Ridgeway National Trail, and climbs the Chiltern escarpment to Christmas Common. The remainder of the route is through the Chiltern beechwoods, passing Pishill, Maidensgrove, Bix Bottom and Middle Assendon to arrive at Henley. The path finishes on the bank of the River Thames; Oxfordshire's southern border.

Looking down from the Chiltern scarp

Railway stations at Shipton-under-Wychwood, Ascott-under-Wychwood (limited service), and Charlbury (on the Cotswold Line), Islip and Henley on Thames are on the path, and Tackley and Kingham are near to it. Other towns and villages on or near the route have bus connections to railheads.