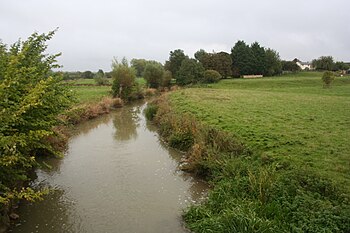 The River Evenlode is Cotswold river which flows through Gloucestershire and Oxfordshire. It is ultimately a tributary of the River Thames.

The Evenlode rises near Moreton-in-Marsh, Gloucestershire in the Cotswold Hills and flows south-east passing near Stow-on-the-Wold, Charlbury, Bladon, and Cassington, and its valley provides the route of the southern part of the Cotswold Line.

The River Evenlode passes through many villages and towns in Oxfordshire including Ascott-under-Wychwood, Chadlington and Charlbury. The river joins the Thames approximately one mile down river from Cassington on the reach above King's Lock, which is 3 miles northwest of Oxford.

The river is largely privately owned, used for fishing and other leisure activities. The Environment Agency has undertaken restoration work, as of 2008, to recover from the effects of excessive dredging.[1] Powered craft are not allowed on the river.

Hilaire Belloc commemorated the river in some of his poetry, as well he might.