From Wikishire
(Redirected from Henley on Thames)
Jump to: navigation, search

Henley-on-Thames is a prosperous town on the north bank of the River Thames in Oxfordshire. It lies some 10 miles downstream from Reading and 10 miles upstream from Maidenhead. 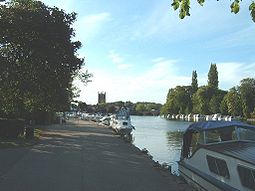 Henley-on-Thames from by the playground near the railway station

The gentler slopes of the Chiltern Hills look down on the town, with wooded hills and green fields. Henley itself is town full of history, with picturesque streets graced with many older buildings, a town hall and market square, where a busy market is held on market days. The town has attracted a wealthier class of individual and of visitors, reflected in the boutiques along the high street.

Henley is most famous for the yearly Henley Regatta, which sees rowing teams and other boatmen and many spectators descend upon the town in great numbers. The town's one museum accordingly is the River and Rowing Museum, in Mill Meadows. The museum was established in 1998 and officially opened by Queen Elizabeth II. The museum, designed by the architect David Chipperfield, features information on the River Thames, the sport of rowing, and the town of Henley itself.

Away from the regatta season the river remains popular for boating, both for amateur rowers any pleasure cruises. The Thames here is lined with boathouses on the Oxfordshire bank and the Berkshire bank of the river.

The Henley Festival of Music and Arts takes place on the river too each year attracting top entertainers to perform on a floating stage.

The Mill Meadows are maintained as a public recreational park. 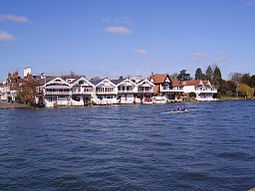 The Henley Royal Regatta is one of the highlights of the social calendar of the English upper and middle classes. The Regatta was first held in 1839 and has been held each year ever since, breaking only during the two World Wars.

The Regatta was originally a public attraction run by the town council, with a fair and other amusements, but swiftly rowing dominated it. The Regatta also lengthened from a single afternoon when it began, to two days from 1840, then four days of races by 1906. In 1986 the Regatta was extended to five days. So popular has it become that qualifying heats are held before teams may enter the races.

In 1851 Prince Albert became the patron of the Regatta and it became the Royal Henley Regatta.

Other regattas and rowing races held on the same straight reach include the Henley Women's Regatta and Henley Boat Races for women's and lightweight teams, those between the Universities of Oxford and Cambridge, Henley Veteran Regatta, Upper Thames Small Boats Head, Henley Sculling Head, and Henley Small Boats Head. These heads often attract strong crews that have won medals at National Championships.

Henley does not appear in Domesday Book of 1086. The first record of medieval settlement dates to 1179, when it is recorded that King Henry II "had bought land for the making of buildings". King John granted the manor of Benson and the town an manor of Henley to Robert Harcourt in 1199. A church is first mentioned at Henley in 1204. In 1205 the town received a paviage grant, and in 1234 the bridge is first mentioned. In 1278 Henley is described as a hamlet of Benson with a Chapel. It is probable that the street plan was established by the end of the 13th century.

As a demesne of the crown it was granted to John de Molyns, in 1337 whose family held it for about 250 years. It is said that members for Henley sat in parliaments of Edward I and Edward III, but no writs have been found to substantiate this.

The existing Thursday market, it is believed, was granted by a charter of King John. A market was certainly in existence by 1269, however, the jurors of the assize of 1284 said that they did not know by what warrant the earl of Cornwall held a market and fair in the town of Henley. The existing Corpus Christi fair was granted by a charter of Henry VI.

During the Black Death of the 14th century, Henley lost 60% of its population.[1]

By the beginning of the 16th century the town extended along the west bank of the Thames from Friday Street in the south to the Manor, now Phyllis Court, in the north and took in Hart Street and New Street. To the west it included Bell Street and the Market Place.

King Henry VIII granted a new charter and the titles "mayor" and "burgess".

Henley suffered from both sides in the Civil War. In the Glorious Revolution of 1688, William III rested at Henley on his march to London and here received a deputation from the Lords.

The period of prosperity in the 17th and 18th centuries was due to manufactures of glass and malt, and to trade in corn and wool.

Henley-on-Thames owes much to its location and port that supplied London with timber and grain. 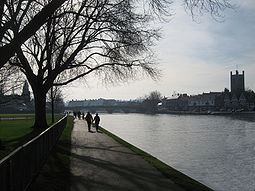 To celebrate Queen Victoria's Jubilee, 60 oak trees were planted in the shape of a Victoria Cross near Fair Mile.

The Old Bell pub in the very centre of Henley has been dated by experts at 1325, making it the oldest building in the town.[2]