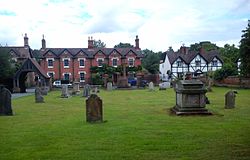 Ombersley is a village and parish in Worcestershire. It is six miles north of Worcester, four miles west of Droitwich, on the intersection of the A449 & A4133.

The first known reference to the village[1] was the granting of a Charter to Abbot Egwin, later Saint Egwin, of Evesham Abbey in AD 706. This was the Charter of King Æthelweard of the Hwicce, which granted twelve cassates in Ombersley to the Benedictine Abbey at Evesham.[2]

During the reign of William the Conqueror, the Domesday Book indicates the village was within an exclave of the hundred of Fishborough in 1086 and remained the property of the Abbey of Evesham (Saint Mary).[3] It remained the property of the abbey until the Dissolution of the Monasteries in the early 16th century. By 1848 the village was within the parish of Ombersley (St Ambrose), in the hundred of Oswaldslow.[4]

Ombersley Court is the traditional home of the Lords Sandys, many of whom are buried in the family mausoleum in the churchyard of St Andrew's parish church. When St Andrew's was built in its current form between 1825 and 1829, the chancel of the old church was adapted for use as mausoleum for the lords of the manor.[5]

It is a Grade-I listed building.[6]

Ombersley was part of a Royal forest until 1229. The forest gives the village its name.[7]

This Worcestershire article is a stub: help to improve Wikishire by building it up.
Retrieved from "https://wikishire.co.uk/w/index.php?title=Ombersley&oldid=56853"
Categories: