Blockley is a village and parish forming a detached part of Worcestershire, locally situate in Gloucestershire, about three miles north-west of Moreton-in-Marsh. The civil parish includes the hamlets of Draycott, Paxford and Aston Magna, and the deserted hamlets of Northwick and Upper Ditchford.

The Church of England parish church of St Peter and St Paul is late Norman,[3] built in about 1180.[2] The chancel is of three bays[3] but only one of the six Norman lancet windows, that at the east end of the north wall, survives unaltered.[2] At the end of the 13th century a two-storey extension was added on the north side of the chancel.[4] The upper floor is a chantry chapel [5] and the lower is a vestry.[2] In about 1310 the east window of the chancel was inserted and at least two of the windows in the south wall of the chancel were enlarged in the Decorated Gothic style.[2] At the end of the 14th century the north aisle was added, linked with the nave by an arcade of four bays.[2] The large Perpendicular Gothic window in the middle of the south wall of the chancel was inserted in the 15th century, replacing the Norman original.[2]

In 1715 the Vicar, the Rev. Dr Erasmus Sanders, had a new school built for the parish.[2] Blockley still has a Church of England primary school.[9]

Much of the parish was farmed under an open field system until 1772, when an Act of Parliament provided for the enclosure of the remaining common lands.[2] 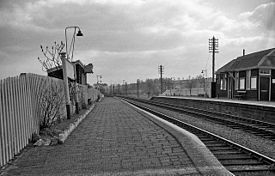 Blockley is home to Watsonian Squire, the largest UK manufacturer of sidecars and trailers for motorbikes. It has been based in the village since 1984.[10]

Blockley has two public houses: The Crown Inn and Hotel, a former coaching inn[11] and The Great Western Arms belonging to the Hook Norton Brewery.[12]