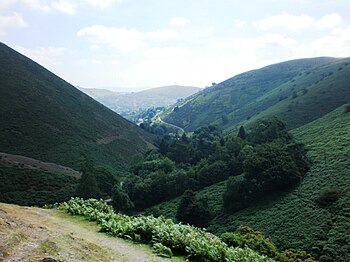 The Carding Mill Valley (or 'Cardingmill Valley') in Shropshire is a steep valley slicing into the eastern slope of the Long Mynd down to Church Stretton.

Like the Long Mynd as a whole, the slopes of the valley belong to the National Trust.

The hills are wild and largely unspoilt, but the valley is named from its industry. In 1812 a carding mill was built to process local fleeces, to allow them to be spun. At first the carded wool was sold to the women of the villages spinning thread in their ow cottages, but in 1824 George Corfield bought the mill and expanded it. He built a factory and installed spinning jennies and hand looms to manufacture cloth. He did not though have the benefit of concentration found in heart of the woollen industry (which was in the new cities of the West Riding of Yorkshire) so he diversified in a further expansion in 1851, beyond weaving and into clothing manufacture, employing sewers and dressmakers.

By 1881 part of the factory was used for ginger beer and soda water manufacture and another part as a tea-room. By this time many people had new-found wealth and increased leisure and Church Stretton was developing as a spa town known as "Little Switzerland".

Two reservoirs were built, one in 1865 in Townbrook Hollow and 1902 in New Pool Hollow. The old mill was demolished in 1912 and the factory turned into an hotel and cafe. By 1920 the factory had been converted to flats and the Chalet Pavilion had been imported from Scandinavia to be used as a tea-room for the day trippers.

Tourism (visiting the hills rather than the industry) eventually took over, expanding in the great days of the charabanc trips.

Today the valley is quiet again.