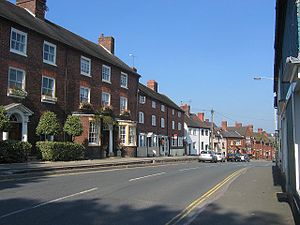 The trail through Cleobury Mortimer

The Jack Mytton Way is a long-distance footpath and bridleway, for horse riders, hillwalkers and mountain bikers, in southern and central Shropshire. The route is 93 miles long and typically takes a week to ride on horseback.

For much of its length, the Jack Mytton Way passes through the Shropshire Hills, a designated 'area of outstanding natural beauty' and includes parts of Wenlock Edge. It passes over the Clee Hills, and through the towns of Cleobury Mortimer, Church Stretton, Clun and Much Wenlock, passing close to Bridgnorth, Broseley and Highley.

The south-west end is at Llanfair Waterdine. East of Roman Bank, it forms a loop.

The route is named after Jack Mytton (1796–1834) a Shropshire landowner, MP, horseman, foxhunter, gambler and Regency rake. He was also known as Mad Jack.[1]