From Wikishire
(Redirected from London Loop)
Jump to: navigation, search 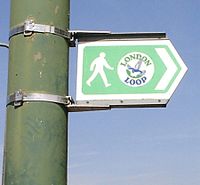 The London Outer Orbital Path — more usually the "London LOOP" — is a 149-mile signed walk along public footpaths, and through parks, woods and fields around the edge of the sprawling metropolitan conurbation surrounding London. Described as "the M25 for walkers", it runs through five counties: Kent, Surrey, Middlesex, Hertfordshire and Essex.

The walk is a circualr walk, but starting at Erith on the south bank of the River Thames and running clockise, it passes through Crayford, Petts Wood, Coulsdon, Banstead, Ewell, Kingston upon Thames, Uxbridge, Elstree, Cockfosters, Chingford, Chigwell, Grange Hill and Upminster Bridge before ending at Purfleet, almost directly across the Thames from its starting point. Between these places the route passes through green buffers and some of the hills surrounding the London suburbs.

The walk was first proposed at a meeting between ramblers and the Countryside Commission in 1990 and an official launch was held at the House of Lords in 1993. The first section was opened on 3 May 1996, with a ceremony on Farthing Downs, Coulsdon. Other sections followed at the rate of two or three per year as signs were installed and leaflets for individual sections published, the route becoming fully walkable in 2001. A sister route, the Capital Ring, has also been launched.

The route is divided into 24 sections in three colour-coded groups: the "blue" group broadly in Kent and Surrey, the "green" group in Middlesex and southern Hertfordshire, and the "yellow" group broadly within Essex. Each of the 24 sections links public transport nodes, though they vary greatly in length, from 3.8 miles (section 14) to 10.4 miles (section 16). A guidebook by David Sharp adds together some of the shorter walks among the 24 to give 15 approximately equal stages, designed to be day walks..[1]

Signposts, waymarks and information boards direct the walker along the route. In countryside locations the waymarks consist mostly of a simple white disc mounted on a wooden post, with a directional arrow and flying kestrel logo in blue and text in green. However, local authorities are responsible for funding these signs, so the quality varies from one borough to the next, with some sections not signed at all. The 54-mile blue route from Erith to Kingston is maintained by the Downlands Countryside Management Project, a joint initiative by several councils, and is complete with signs and information boards, in addition to maps available from Tourist Information Centres.

Between the ends at Purfleet and Erith there is no river crossing to complete the loop (though in past ages there was once a ferry to Erith which was mainly used by pilgrims on their way to Canterbury). In 2011 a proposal for a ferry to link the ends, and to link to riverbuses upstream at Woolwich, was shortlisted in the RIBA Forgotten Spaces competition.[2]