The village is named from an ancient lock on the Lea here. Today's Enfield Lock was rebuilt in 1922.[1]

Enfeld Lock is reckoned as lying east of the Hertford Road between Turkey Street and the motorway, extending to the River Lee Navigation and including the Enfield Island Village. The area forms part of the Lee Valley Park and the Enfield Lock Conservation Area.[2] On its eastern boundary Enfield Lock has marshland formerly used as a testing site between the Royal Small Arms Factory and the Gunpowder Mills. To the south is Brimsdown, the north Waltham Cross and to the west Bullsmoor and Freezywater.

Enfield Lock is recorded by that name in 1710. Earlier it is found as Norhtlok (1355) and The Locke (1657). The name shows the presence of a lock or barrier on the river long predating the canalisation of the Lea, the Middle English lok representing either.[3]

The area was first developed from about 1812 when a government-owned rifle factory, which was later known as the Royal Small Arms Factory or RSAF Enfield, was built. The factory was built towards the end of the Napoleonic War on the instructions of the Board of Ordnance on marshland at Enfield Lock on the banks of both the River Lea and the River Lee Navigation.

The RSAF was closed in the late 1980s, shortly after privatisation, and the majority of the former site has now been redeveloped into a large housing development known as Enfield Island Village. The original machine shop frontage and the older part of the rear structure has been retained and was converted into workshops and retail units by the Enfield Enterprise Agency. The distinctive terraced cottages of Government Row were built as houses for factory workers.

Until the construction of the M25 in the 1980s, and the later building of the A1055, the area was much like a village with only a small population and consisting of only a few roads in the locality. Roads such as Ordnance Road, Salisbury Road and Medcalf Road are still populated by families who have lived in the Enfield Lock area for several generations.

After rioting had spread from neighbouring Tottenham on 8 August 2011, the Sony DADC/PIAS distribution centre on the Innova Business Park was looted and destroyed by fire.[4]

The Home Secretary, Theresa May, was shown the destroyed distribution centre by chief police officers and firefighters on 12 August 2011.[5] In September 2012, the Prime Minister, David Cameron, opened the rebuilt warehouse.[6] 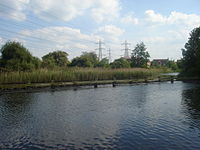 Section 18 of the London LOOP, a long distance footpath, can be accessed at Enfield Lock railway station. The path connects with the Lea Valley Walk above Enfield Lock at Ordnance Road, and the (unwaymarked) Middlesex Greenway.

Angling is allowed on the River Lee Navigation upstream and downstream of Enfield Lock. Information from the River Lea Anglers Club.[7]

Gunpowder Park, which lies to the east of Enfield Lock, is a large open space consisting mostly of marshland and lakes. The land is owned and managed by the Lee Valley Regional Park and is open to the public.[8]