St Davids Cathedral is in St Davids, a tiny city on the cliff-girt west coast of Pembrokeshire.

This is an ancient place, with a history reaching back to the sixth century, and the current cathedral was built from the twelfth century. It serves today as the cathedral church of the Diocese of St Davids in the Church in Wales.

The monastic community was founded by Saint David, Abbot of Menevia, who died in 589. Between 645 and 1097, the community was attacked many times by raiders, including the Vikings, however it was of such note as both a religious and intellectual centre that King Alfred summoned help from the monastic community at St Davids in rebuilding the intellectual life of the Kingdom of Wessex. Many of the bishops were murdered by raiders and marauders, including Bishop Moregenau in 999, and Bishop Abraham in 1080. The stone, which marked his grave, known as the "Abraham Stone", is intricately carved with early Celtic symbols and now on permanent display within the Cathedral Exhibition at Porth-y-Tŵr.

In 1081, William the Conqueror visited St David's to pray, and thus recognised it as a holy and respected place. In 1089, the shrine of David was vandalised, and stripped of its precious metals. In 1090, the Welsh scholar Rhigyfarch wrote his Latin “Life of David”, highlighting David's sanctity, and by this began the fervency which the cult of Saint David obtained in the Middle Ages.

In 1115, with the area under Norman control, King Henry I of England appointed Bishop Bernard as Bishop of St Davids. He began to improve life within the community, and commenced construction of a new Cathedral. In 1123, Pope Calixtus II granted Bishop Bernard’s request to bestow a Papal privilege upon St Davids, making it a centre of pilgrimage for the Western world, the Pope decreeing "Two pilgrimages to St Davids is equal to one to Rome, and three pilgrimages to one to Jerusalem"[1] The new Cathedral was quickly built. Bishop Bernard consecrated the new Cathedral in 1131. In 1171 King Henry II visited, which ensured that the following of David increased, and the need for a larger Cathedral.

The present Cathedral was begun in 1181, and completed not long after. Problems beset the new building and the community in its infancy; the collapse of the new tower in 1220, and earthquake damage in 1247/48. 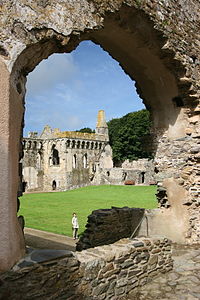 Under Bishop Henry de Gower (1328–1347) the Cathedral was modified further, with the rood screen] and the Bishop's Palace, intended as permanent reminders of his episcopacy. The Palace is now a picturesque ruin.

In 1365, Bishop Adam Houghton and John of Gaunt began to build St Mary's College, a chantry, and Houghton later added the cloister which connects it to the cathedral.[2]

The episcopacy of Edward Vaughan (1509–1522) saw the building of the Holy Trinity chapel, with its fan vaulting, possibly inspired the roof of King’s College, Cambridge. This period also saw great developments for the nave, whose roof and Irish oak ceiling were constructed between 1530-40. Bishop Barlow was a reformation bishop and he determined to suppress the cult of David: he stripped St David's shrine of its jewels and confiscated the relics of St David and St Justinian in order to counteract superstition in 1538. In 1540, the body of Edmund Tudor, Earl of Richmond and father of Henry VII, was brought from the dissolved Greyfriars’ Priory in Carmarthen to be entombed in the chancel.

Under Oliver Cromwell the Cathedral ceased to be a cathedral and was all but destroyed by Cromwell’s forces, and the lead stripped from the Bishop’s Palace roof. 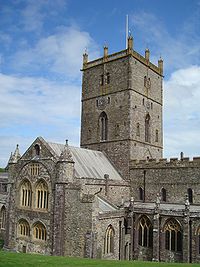 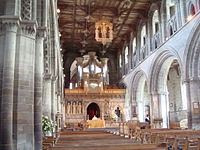 The architect John Nash was commissioned to restore the west front in 1793 to repair the damage done two hundred years previously. Eclectic in style (with Gothic and Perpendicular characteristics - the latter attributed partly from his destruction of the windows of the chapel of St Mary's College in order to reuse that tracery for his west front) his work soon proved to be substandard (as had his previous work on the chapter house). Within a century the Nash west front had become unstable and the whole building was restored by George Gilbert Scott between 1862 and 1870. The lady chapel was restored by public subscription in 1901 and the eastern chapels were restored through a legacy of the Countess of Maidstone between 1901 and 1910.

The cathedral suffered the pains of disestablishment in 1923, as did the whole Church in Wales. The diocese was made smaller by the removal of the Archdeaconry of Brecon to form the new Diocese of Swansea and Brecon. However, this left a large area as a diocese to govern and St Davids began to deteriorate as the centre of the diocese, being nowhere near the centre – the bishop’s residence had been at Carmarthen since the 16th century, but administration and the focus moved from the cathedral to the diocese’s now largest town.

The 1950s saw the appointment of the Reverend Carl Witton-Davies as dean; appointed in his 30s, his driving vision and energy was short-lived as he was offered what some was believed as a preferment as Archdeacon of Oxford, but did not leave that position for the rest of his service in the church. The cathedral began to have life again and the famous Welsh Youth Pilgrimages to St Davids led many to a life of service in the church and provided the Church in Wales with inspired clergy for a decade following.

The 1960s saw the restoration of St Mary’s College as the cathedral hall, for the use of the cathedral parish and for use as an area for art exhibitions and poetry readings. It was dedicated by Archbishop Edwin Morris in 1966 and the inaugural event was a poetry reading by the renowned poet R. S. Thomas, who served as a vicar in the Bangor diocese.

During the 1980s a number of official events in cathedral life took place: in 1981, Charles, Prince of Wales visited to celebrate the 800th anniversary of the consecration of the cathedral; and on Maundy Thursday 1982, Queen Elizabeth II distributed the Royal Maundy at the cathedral. In 1989-90, the 1400th anniversary of the death of St David was presided over by the Archbishop of Wales, George Noakes, who was also diocesan Bishop of St Davids.

In 1995, the Queen granted letters patent which conferred the title of "city" to St Davids. Around this time too a great deal of work was undertaken or planned: a new organ was badly needed and the west front needed extensive restoration, and the cathedral developed a visitor centre within the bell tower, and enlarged the peal of bells from eight to ten and by the "reconstruction", or completion, of the cathedral cloisters to house the cathedral choir, vestries, an education suite, rooms for parish use and a refectory as a reminder of the monastic beginnings. The first project was the restoration of the west front, with the original quarry that was used for stone at Caerbwdi Bay being reopened. This phase was completed in 1998, in time for the organ to be dismantled and rebuilt by the organ builders Harrison and Harrison of Durham. The organ was completed in the middle months of 2000 and dedicated on 15 October that year.

The ring of bells was cast by Whitechapel Bell Foundry of London and presented as a gift by the American Friends of St Davids Cathedral. The substantial task of rebuilding the cloisters as an education centre and refectory began in 2003 and was completed in May 2007. The translation of Wyn Evans from dean to bishop led to the appointment of Jonathan Lean as dean in 2009.

The bells are not hung in the central tower of the cathedral but in the old gatehouse, Porth y Twr. There are 10 bells with the heaviest weighing 24cwt-3qr-25 lbs in D, the back eight bells were cast in 1928 by Mears & Stainbank, London and two trebles added in 2000 cast by Whitechapel Bell Foundry, London. Details of the bells:

The restored Shrine of St David was unveiled and re-dedicated by the Right Reverend Wyn Evans, Bishop of St Davids, at a Choral Eucharist on St Davids Day 2012.[3] 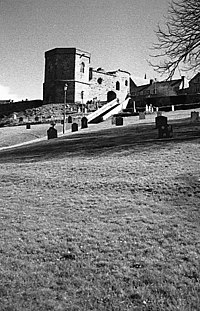 Porth y Twr, viewed from beside the cathedral

There are at least three services said or sung per day, each week, with sung services on five out of seven days.

The cathedral choir at St Davids were the first Cathedral choir in the United Kingdom to use girls and men as the main choir, rather than boys and men.[4] Many inaccurately attribute this to Salisbury Cathedral, however they introduced boys and girls on an equal basis, whereas St Davids used girls as their ‘main’ cathedral choristers. There is also a boys' choir whose weekly evensong is a major event within the cathedral week. They sing with the Vicars Choral regularly.

The St Davids Cathedral Festival runs through the Whitsun school holiday each year, and showcases some of the world’s best performers. The week sees performers, both professional and young, play in front of thousands. The Cathedral Choir serve as a highlight each year, being a very popular concert, as well as the Festival Chorus and Orchestra who perform a major work on the final night of the Festival.

Gerald of Wales (Giraldus Cambrensis) in the 13th-century relates the strange story of a marble footbridge leading from the church over the Alun rivulet in St Davids. The marble stone was called 'Llechllafar' (the talking stone) because it once spoke when a corpse was carried over it to the cemetery for interment. The effort of speech had caused it to break, despite its size of ten foot in length, six in breadth and one in thickness. This bridge was worn smooth due to its age and the thousands of people who had walked over it, however the superstition was so great that corpses were no longer carried over it.[5] This ancient bridge was replaced in the 16th-century and its present whereabouts is not known.[6][7]

Another legend is that Merlin had prophesied the death on Llechllafar of an English King, conqueror of Ireland, who had been injured by a man with a red hand. King Henry II on a pilgrimage to Saint Davids, having come over from Ireland, heard of the prophecy and crossed Llechllafar without ill effect. He boasted that Merlin was a liar, to which a bystander replied that the King would not conquer Ireland and was therefore not the king of the prophecy.[5] This turned out to be true, for Henry never did conquer the whole of Ireland.[6][7]

Notable burials in the cathedral include:

A specification of the organ can be found on the National Pipe Organ Register.[8]