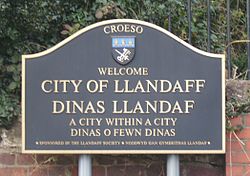 Llandaff is a cathedral town in Glamorgan which has become an outer suburb of Cardiff. It was incorporated into the city's civic boundary in 1922, although it retains somewhat of a separate identity, and is signposted as the "City of Llandaff".

Llandaff Cathedral is the seat of the Bishop of Llandaff in the Church in Wales, whose diocese covers Cardiff and the greater part of Glamorgan.

The name of the town means "Church of the Taff, after the river flowing by it.

Most of the history of Llandaff centres on its role as a religious site. Before the creation of Llandaff Cathedral it became established as a Christian place of worship in the 6th century AD, probably because of its location as the first firm ground north of the point where the river Taff met the Bristol Channel, and because of its pre-Christian location as a river crossing on a north south trade route. Evidence of Roman-British ritual burials have been found under the present cathedral.

The date of the moving of the cathedral to Llandaff is disputed, but elements of the fabric date from the 12th century, such as the impressive Romanesque arch named the Urban Arch after the 12th century Bishop, Urban.

The cathedral, and the town, has had a history of continual destruction and restoration, as a result of warfare, neglect, and natural disaster. Llandaff has been a focal point of devastating attacks by Owain Glyndŵr and Oliver Cromwell. It was the second most damaged Cathedral in the United Kingdom (after Coventry Cathedral) following Luftwaffe bombing during Second World War, and subsequently restored by the architect George Pace. In 2007 a lightning strike to the cathedral's spire sent a surge through the building which destroyed its organ. Its replacement, the largest to be built in the UK for over 40 years, was inaugurated in 2010.

One of its main modern points of interest in the interior is the aluminium figure of Christ in Majesty (1954–5), by Jacob Epstein, which is suspended above the nave.

A Bishop's Palace, now in ruins, lies to the south of the Cathedral. It is believed it was constructed at a similar date to Caerphilly Castle, in the late 13th century. It is also believed it was abandoned after being attacked and damaged by Owain Glyndwr in the 1400s.[1] The gatehouse of the Palace survives and the courtyard is now a public garden.[1]

Llandaff never developed into a chartered borough, and by the nineteenth century was described as reduced to a mere village... It consists of little more than two short streets of cottages, not lighted or paved, terminating in a square, into which the great gateway of the old palace formerly opened, and where are still several genteel houses.[2] 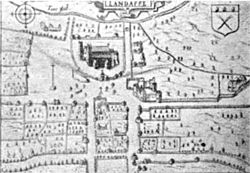 Historically Llandaff was informally known as a "city" because of its status as the seat of the Bishop of Llandaff. This status was never officially recognised however.[3] The ancient parish of Llandaff included a wide area. Apart from Llandaff itself, it included the townships of Canton, Ely, Fairwater, and Gabalfa.

During the development of the South Wales coalfield and Cardiff Docks, the parish was gradually absorbed into the Borough of Cardiff during the 19th and 20th centuries. Seen as a clean and green up-market countrified village location close to the fast developing city, many of the better-off coal merchants and business people chose to live in Llandaff, including the Insole family. The house now known as Insole Court dates originally from 1856.

The major employment sectors in the area are:

BBC Wales have their headquarters at Broadcasting House, Llantrisant Road in Llandaff. The Doctor Who episode The Eleventh Hour (2010), was filmed here, renamed "Leadworth", the home of Amy Pond.[4]