Colonsay is an island of Argyllshire in the Inner Hebrides. It may be found north of Islay and south of Mull. It has an area of 10,067 acres. Aligned on a southwest to northeast axis, the island measures eight miles long and reaches three miles at its widest point.

This island was the ancestral home of Clan Macfie and the Colonsay branch of Clan MacNeil.

Although Colonsay appears bare and somewhat forbidding on approach from the sea, its landscape is varied, with some sandy beaches, and a sheltered and fertile interior. It is linked by a tidal causeway (called The Strand) to Oronsay.

The Colonsay Group, which takes its name from the island, is a sequence of mildy metamorphosed Neoproterozoic sedimentary rocks an estimated 16,400 feet thick that also outcrop on the islands of Islay and Oronsay and the surrounding seabed. The sequence has been correlated with the Grampian Group, the oldest part of the Dalradian Supergroup.

In 1995 evidence of large-scale Mesolithic nut shelling, some 9,000 years ago, was found in a midden pit at Staosnaig on the island's sheltered east coast, in a large, shallow pit full of the remains of hundreds of thousands of burned hazelnut shells. Hazelnuts have been found on other Mesolithic sites, but rarely in such quantities or concentrated in one pit. The nuts were radiocarbon dated to 7720+/-110BP, which calibrates to circa 7000 BC. Similar sites in Britain and its dependencies are known only at Farnham in Surrey and Cass ny Hawin on the Isle of Man.[1][2]

This discovery gives an insight into communal activity and forward planning of the period. The nuts were harvested in a single year and pollen analysis suggests that the hazel trees were all cut down at the same time.[2] The scale of the activity is unparalleled elsewhere in the north. The pit was originally on a beach close to the shore, and there were two smaller stone-lined pits, whose function remains obscure, a hearth, and a second cluster of pits.[1] 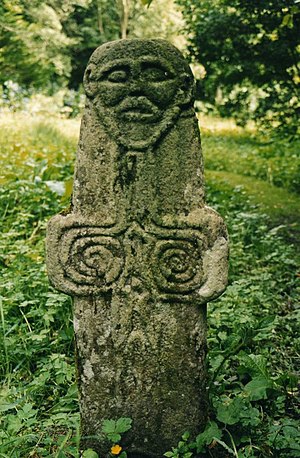 There are a variety of ruined hill forts on the island such as Dùn Cholla and Dùn Meadhonach. The eighth century Riasg Buidhe Cross has been re-erected in the gardens of Colonsay House. St Cathan's Chapel may date from the 14th century. The ruins of the Chapel of St Mary are little more than foundations and may date to an even earlier period. In 1549, Dean Monro wrote that Colonsay was:

During the 18th century the lairds of the island were Macneils, and included Archibald Macneil. Colonsay House was first built by the Mcneil family in 1722. Since 1904 the house has been the property of the island's later owners, the Barons Strathcona. Colonsay is owned by Donald Howard, 4th Baron Strathcona and Mount Royal and Colonsay House is currently occupied by his eldest son, Alexander Howard and his family.[4]

In 2013 Alexander Howard infuriated island ­residents, by accusing them of removing gravel from a beach without permission. Locals said that innocent people had been labelled "thieves" and "peasants". Howard later admitted the problem had been caused by builders from the mainland but failed to offer an apology to islanders.[5]

The island's population was 144 as recorded by the 2011 census; an increase of nearly 15% since 2001 when there were 108 usual residents. Colonsay's village is Scalasaig on the east coast, from where ferries sail to Oban and, between April and October, to Kennacraig by way of Port Askaig on Islay.

Recently there has been a growth of tourism as the mainstay of the island's economy, with numerous holiday cottages, many of them owned and managed by the Isle of Colonsay Estate. The Colonsay Hotel, the only hotel on the island, is also estate owned.[6] 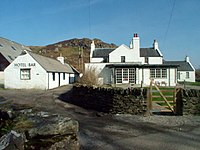 The island has a tiny bookshop specialising in books of local interest; it is also the home of the House of Lochar publishing company specialising in history.[7] There is a hotel overlooking the harbour,[8] a cafe and bakery, and a shop and post office. In 2006 the former grass airstrip was upgraded and provided with a hard surface, in readiness for the introduction of a scheduled air service from Oban (Connel). This service began operating in June 2008 with morning and evening flights on Tuesdays and Thursdays.[9] The service is provided by Hebridean Air Services

Colonsay Community Development Company, the local development trust is “engaged in a range of work which reflects a sustainable approach to the regeneration of our island”. Current projects include running the islands coal supply and only petrol pump, a major Rhododendron ponticum eradication programme and a feasibility study into the possibility of improving the harbour and surrounding area. 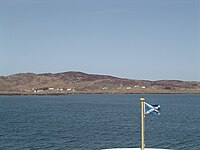 Scalasaig from the Port Askaig ferry

2007 saw the opening of the Colonsay Brewery, a micro-brewery offering three different products.[10] Colonsay is the smallest island in the world with its own brewery.[11] The business employs two people, roughly ten per cent of the island workforce.

The nature of island life was exemplified by a story reported in 1993 that, at that time, the last recorded crime was treachery against the King (James VI) in 1623.[12] In November 2006 though four hundred years of peace was broken when a construction worker from Glasgow was arrested and confessed to theft by housebreaking having entered an unlocked house and stolen £60 in cash. Media interest was stirred when it was reported that this was the first recorded crime since 2004 and the "first ever theft from a house".[13] The next reported crime was in 2013 involving vandalism to a car.[14]

Colonsay may be the smallest island ever to host a rugby festival, all the more remarkable as there is no permanent rugby pitch.[15]

In 2008, Colonsay hosted the first ever Ceòl Cholasa, the island's own folk festival. This has now become an annual event and has seen performances by numerous well-known artists as well as performances from local island musicians.[18]

Since 2011 the island has held a three week "Festival of Spring" annually in May. Its aim is to encourage tourism onto the island, with events and activities led by both local inhabitants and visiting guest "speakers/experts".[19]

In 2012 the island staged its first book festival which featured, amongst others, Alexander McCall Smith, James Robertson, and Scots Makar Liz Lochhead. The line up for 2013 was headed by crime writer Ian Rankin.[20]

The island has a herd of wild goats, and is known for its bird life including Black-legged Kittiwake, Cormorant, Guillemot, Corncrake and Golden Eagle.

Colonsay and Oronsay host about 50 colonies of the only native species of honeybee in Britain–Apis mellifera mellifera. This bee has suffered serious declines on the mainland and from 1 January 2014 it has been an offence to keep any other species of honeybee on either island.[21]

Colonsay's name derives from Old Norse and means "Kolbein's island"[22][23] (although Haswell-Smith offers "Columba's island").[24] In the 14th century the name was recorded as Coluynsay and by Dean Monro in the 16th century as Colvansay. The modern Gaelic is Colbhasa. [23]

Scalasaig also has a Norse derivation and means "Skali's bay".[25]