With an area of 338 square miles, Mull is the fourth-largest of the islands surrounding Great Britain. In the 2011 census the usual resident population of Mull was recorded as 2,800. In the summer this is supplemented by many tourists. Much of the population lives in Tobermory, the only burgh on the island.

It is widely understood that Mull was inhabited shortly after the end of the last Ice Age, from around 6000 BC. Bronze Age inhabitants built menhirs, brochs and a stone circle with examples of burial cairns, cists, standing stones, stone circles, pottery and knife blades providing compelling evidence. Between 600 BC to AD 400, Iron Age inhabitants were building protective forts, duns and crannogs.

The early Christian period began in the 6th Century, with AD 563 being a pivotal point as it is believed that Christianity was brought to this part of northern Britain by St Columba, when he arrived from Ireland to set up a monastery on the island of Iona just off the southwest point of Mull.

In the Viking Age, Mull was within the influence of the Norse rulers, which dominance is told in the many Norse placenames in and around the island. After the collapse of the Lordship of the Isles in 1493, Mull was taken over by the clan MacLean, and in 1681 by the clan Campbell.

Legend has it that the wreck of a Spanish galleon, laden with gold, lies somewhere in the mud at the bottom of Tobermory Bay — although the ship's true identity, and cargo, are unknown. By some accounts, the Florencia (or Florida, or San Francisco), a member of the defeated Spanish Armada fleeing the English fleet in 1588, anchored in Tobermory to take on provisions. Following a dispute over payment, the ship caught fire and the gunpowder magazine exploded, sinking the vessel and whatever lay in her hold, which local legend claims to be £300,000 in gold bullion.[2] Other stories say the vessel was the San Juan de Sicilia (or San Juan de Baptista), which, records indicate, carried soldiers, not treasure.[3][4] According to that account, the island's chief, Lachlan Mor Maclean, struck a deal with the Spanish commander to reprovision and refit the ship in return for military intervention on the side of the MacLeans in their feud with enemies on nearby islands.[5][6][7] Whatever the true story, numerous searches for the wreck, and its rumored treasure, took place from the mid-17th century to the end of the 20th century.[8] No significant treasure has ever been recovered in Tobermory Bay.[9]

In 1773 the island was visited by Samuel Johnson and James Boswell during their famous Tour of the Western Islands.

The whole island became a Restricted Area during Second World War. The bay at Tobermory became a naval base commanded from HMS Western Isles. The base and the Restricted Area were under Commodore (later Vice Admiral) Sir Gilbert Stephenson, whose strict discipline and ferocious temper earned him the nickname "The Terror of Tobermory".[10] The base was used to train Escort Groups in anti-submarine warfare. 911 ships passed through the base between 1940 and 1945.

Mull enjoys such historic buildings as Duart Castle and Torosay Castle, both open to the public from for much of the year. Moy Castle is a small distressed castle on the shore of Lochbuie.

The mausoleum of Lachlan Macquarie, Governor of New South Wales from 1809 to 1822, and known as "The Father of Australia", may be found near his old patrimonial estate in the village of Gruline. Macquarie had been born on the nearby island of Ulva, ancient seat of clan MacQuarrie. 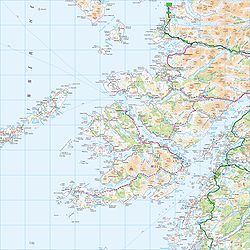 Mull has a coastline of 298 miles and its climate is moderated by the Gulf Stream. The island has a mountainous core, the highest peak on the island being Ben More, which reaches 3,169 feet. Peninsulas, which are predominantly moorland, radiate from the centre.

The Aros peninsula to the north includes the main town of Tobermory, the island's only burgh. Other settlements include Salen and Calgary (the latter named after the Candian city, not the other way round). The Ross of Mull lies to the south west and includes the villages of Bunessan, Pennyghael, Uisken and Fionnphort. Lochbuie, Lochdon and Craignure lie to the east.

Numerous islands lie off the west coast of Mull, including:

Two outlying rock lighthouses are also visible from the south west of Mull, Dubh Artach and Skerryvore. The Torran Rocks are a large shoal of reefs, islets and skerries, approximately 15 square miles in extent, located two miles to the southwest, between the Ross of Mull peninsula and Dubh Artach.

Part of the indented west coast of Mull and some of the offshore islands there are part of the Loch Na Keal National Scenic Area.

Farming, fishing and burning seaweed to kelp ash (used in the manufacture of soap and glass) were the main economic activities on the island until the 19th century. Tobermory was built by the British Fisheries Society in 1788 as a planned settlement to support the fishing industry. In the mid 19th century the Highland Potato Famine and the Highland Clearances reduced the population by two thirds and the island economy collapsed. In the early 20th century there were more sheep than people.

The economy began to revive when the construction of Craignure Pier in 1964 started to bring tourists. Tourism is now the mainstay of the island's economy. Ecotourism became popular from the 1990s and the re-introduction of White-tailed eagles in 2005 became a particular ecotourist drawcard.[11]

There is a small number of fish farms moors in the sea here, and fishing. The Forestry Commission has several plantations on the island. Tobermory also has one whisky distillery and one brewery. 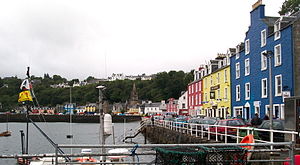 Ferry links to Mull from the mainland include Oban to Craignure (approx. 45 minutes), Kilchoan (Ardnamurchan) to Tobermory (approx. 35 minutes) and Lochaline to Fishnish (approx. 15 minutes).

There are ferry links from Fionnphort on Mull to the neighbouring island of Iona and from Oskamull to Ulva. In past years there were direct sailings to Oban (calling at Drimnin, Salen, Lochaline and Craignure), and Barra, Coll and Tiree from Tobermory. During the summer there was also a sailing to Staffa and Iona from Oban which called at Tobermory.

The Isle of Mull Railway runs from Craignure to Torosay Castle. The service closed in October 2010 apart from a one off closing special day on 4 December 2010.

It is possible to fly to Mull in a private light aircraft using a landing strip near Salen.[12] There was a sea plane that linked Tobermory with Glasgow and Oban. The regular scheduled service terminated in 2009. Loganair operated a scheduled service to Glasgow in the 1960s from Glenforsa.

Mull on film and television

Mull has been used as a location in a number of feature films over the years, including:

The BBC children's TV series Balamory features the town of Tobermory on the island. This increased tourism, as it extended the range of activities to do around the island.

Mull Theatre is a professional theatre company based in a new (2008) theatre production centre on the outskirts of Tobermory.[13] It started at the "Mull Little Theatre" at Dervaig in 1966 and was the "Smallest Professional Theatre in the World" according to the Guinness World Records.

The island is home to over 250 different bird species including the White-tailed Eagle, which was reintroduced in the nearby Island of Rùm and migrated to Mull, where it now has a stronghold. Basking sharks, Minke whales, porpoises and dolphins are among the sea life that can be seen on boat tours from Mull.

The Isle of Mull is a popular destination for naturalists and photographers being one of the primary spots for seeing some of Britain's more elusive species. The island is home to a thriving population of otters that live in coastal habitat, hunting during the day.

The island is also home to several birds of prey such as Hen Harriers, Golden Eagles and Short eared owl, all difficult species to see other than on Mull.