Tiree is an island in the Inner Hebrides lying southwest of Coll. It is the most westerly of the inhabited isles of the Inner Hebrides. Between Tiree and Coll lies the small island of Gunna. Its coasts are a mixture of sea-beaten cliffs and long, crescent-shaped, sandy bays.

Tiree has an area of just over 30 square miles and a population of around 800. Like its neighbour, Coll, and in contrast to mountainous Mull, it is a low-lying island; its highest point is Ben Hynish in the south of the island, at 463 feet. It is also a very fertile isle. Crofting and tourism are the main sources of employment for the islanders.

The main village of Tiree is Scarinish on the south coast of the island, It stands to the southwest of the broad, sweeping Gott Bay, and at the edge of the bay is the commercial jetty from which ferries sail to Arinagour on Coll and to Oban on the mainland, as well as a once weekly trip to Castlebay on Barra. Between the cliffs at Scarinish is the original small harbour.

Tiree Airport is further west, at nearby Crossapol. The island's other settlements include Hynish and Sandaig, both of which have small museums, and Balamartine.

The roads on Tiree, in common with many other small islands, are nearly all single-track roads with passing places. 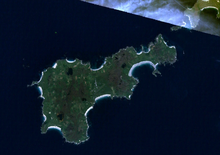 The island is known for the wealth of seabirds to be seen at the Ceann a' Mhara headland.

The name of Tiree is from the Gaelic Tir Iodh, meaning "land of the corn".

A fortress from the 1st century BC is found on the island: Dùn Mòr. Earlier yet is a prehistoric carved Ringing Stone.

In the days of St Columba, who in the 6th century evangelised the Scots and Picts, Tiree is recorded as supplying corn to the monastic community on Iona. A number of early monasteries once existed on Tiree itself, and several sites have stone cross-slabs from this period, for example St Patrick's Chapel, Ceann a' Mhara and Soroby.

The Norse came here and Tiree formed part of the Kingdom of the Isles, known to the Norse as Tyrvist.

Writing in 1549, Donald Munro, High Dean of the Isles, wrote of "Thiridh" that it was: "ane mane laich fertile fruitful cuntrie... All inhabite and manurit with twa paroche kirkis in it, ane fresh water loch with an auld castell. Na cuntrie may be mair fertile of corn and very gude for wild fowls and for fishe, with ane gude heavin for heiland galayis".[Note 1]

In 1770, half of the island was held by fourteen farmers who had drained land for hay and pasture. Instead of exporting live cattle (which were often exhausted by the long journey to market and so fetched low prices), they began to export salt beef in barrels to get better prices. The rest of the island was let to 45 groups of tenants on co-operative joint farms: agricultural organisations probably dating from clan times. Field strips were allocated by annual ballot. Sowing and harvesting dates were decided communally. It is reported that in 1774, the men of Tiree were 'well-clothed and well-fed, having an abundance of corn and cattle'.

Skerryvore lighthouse lies 12 miles south west of Tiree, built with some difficulty between 1838 and 1844 by Alan Stevenson. It is now at the centre of a proposed offshore wind farm development.[2]

The fertile machair lands of the island provide for good quality farming and crofting.

Tiree is also popular for windsurfing. The island hosts the Tiree Wave Classic on a regular basis[3] and was the venue for the Corona Extra PWA World Cup Finals in 2007.[4]

There is a radar station which tracks civil aircraft and the local development trust have commissioned a 950 kW community-owned wind turbine project, the fourth such large-scale project in Scotland.[5]

The island is known for its vernacular architecture, including native dry-stone blackhouses and the 'white houses' which followed them, many retaining their traditional thatched roofs, as well as its unique 'pudding' or 'spotted houses' where only the mortar is painted white.

Tiree has a considerable percentage of Gaelic speakers (48.6% from the 2001 Census[6]) which is high for the Inner Hebrides.