From Wikishire
(Redirected from Hurstingstone Hundred)
Jump to: navigation, search 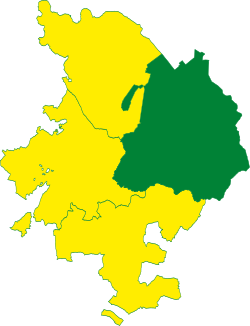 Hurstingstone is a hundred of Huntingdonshire that was mentioned in the Domesday Book of 1086.[1][2]

According to the Victoria County History, the derivation of the name of Hurstingstone is not clear; one possibility is that Hurstingstone comes from the name of the tribe of Hirstina (or Hyrstingas) who had settled in the area.[3] There was a stone called the Hursting Stone on Hustingstone Hill which is the highest point on the road between St Ives and Old Hurst; it was here that the hundred's moot was held until it was moved to Broughton in the 14th century.[3] There was a gallows on Hurstingstone Hill.[3] The Hundred was given by Henry I to the abbot and convent of Ramsey c. 1155 in whose possession it remained until the dissolution of the monastery in 1539.[3] By 1654 the hundred was sold to Edward Montagu and has been in the family of the Earls of Sandwich ever since.[3]

The Hursting Stone resembles the shape of a chair and it is also known as the Abbot's Chair. It is possible that the Hursting Stone was used as a plinth for a stone cross around the 12th century when such crosses were commonly erected at boundaries.[3] The stone has been moved and is now at the Norris Museum in St Ives.