Wistow is a village in Huntingdonshire, found in a small, secluded valley off the Ramsey to St Ives Road, through which runs the Bury Brook, all in the fenland near Warboys.

Wistow is a farming community that has grown up around the central features of its church and manor house.

The parish church is dedicated to St John the Baptist. It is partly Norman, with some 15th Century painted glass.

The manor house dates in part from the early 17th Century whilst timber-framed houses in this attractive village include the 16th and 17th Century Rooks Grove Farm, Porch House, Thatch Cottage and Lavender Cottage.

There is also a thatched village pub, the Three Horseshoes.

Historically the village's name has been given as:

Nature of the land

The parish of Wistow consists of a strip of land running north-east and south-west (some four miles long) and of varying breadth. It is crossed by the high road from Ramsey to St Ives at a distance of 2½ miles from Ramsey. Rather more than half the parish is on the west side of this road. In early days the possession of a portion of the fen for the supply of reeds for thatching, fuel, and summer grazing for stock, was very important, and to obtain these advantages Wistow was connected with the fen by a narrow strip of land about 300 yards wide. 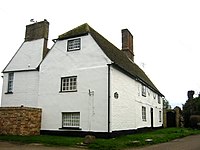 The village itself is rather more than half a mile west of the road from Ramsey to St Ives, and on the west side of a brook that rises in Abbots Ripton and crosses Kings Ripton; it then partly bounds and partly passes through Wistow, emptying itself at Ramsey into the Fen drainage system. The compact little village is on a slight slope facing east, all but thirteen houses being within a quarter of a mile of the church. It is principally ranged round roads forming an irregular four-sided figure with the church at the south-west corner.