From Wikishire
(Redirected from Hartford, Huntingdonshire)
Jump to: navigation, search

Hartford is a village in Huntingdonshire. It stahnds close by the county town, Huntingdon, and not far west of Wyton. Hartford stands on the A141 road but much of its character comes from its position on the north bank of the River Great Ouse.

The village is set near the River Great Ouse on road running from Huntingdon to Ramsey and St Ives.

The Church of England parish church is All Saints' Church, which stands by the river. It was built in 1180 just on the north riverbank and today has six bells. It was visited frequently by William Cowper when he was living in Huntingdon. 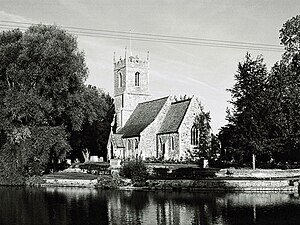 Hartford House formerly called Grove House, originally consisted of a red brick house of early the 18th century. It was owned in 1822 by Richard Bateman Robson from whom it passed to Sir Francis Thomas Hammond. It went to the Desborough family in 1854, who added to the estates and enlarged the house.

On the river at Hartford is a significant marina.