Needingworth is a village in Huntingdonshire, to the east of St Ives and just west of the Greenwich Meridian.

The village is attached to Holywell by a single road, connecting the two villages, wehich leads to Holywell and the river and nowhere beyond. Holywell stands on the north bank of the Great Ouse, while another dead-end road leads eastward from Needingworth across the meadows to the village's own stathe on the Ouse at Overcote Ferry, which has a marina and a pub.

Needingworth is a quiet and pretty village, though residential development has been extensive in recent years and in 1995 a by-pass around Needingworth was completed.

The village developed along the former Turnpike Road from St Ives to Ely. It was largely rebuilt following a major fire in September 1847 which destroyed many of the village's 17th and 18th Century houses. Some survived, notably "The Chestnuts" which dates from 1710, still a private house. Ancient fire hooks displayed in the High Street, commemorate this sad event.

The Village Lock-up or Cage, for the short-term imprisonment of local drunks or felons before they could be moved to larger accommodation, was built in 1838 and is situated in the centre of the village near the War Memorial. It is not currently in use.

There is in Needingworth only one shop, which is also a Post Office, on the High Street. There are also two pubs; The Pike and Eel at Overcote Ferry and The Queen's Head in the village.

There is a Church of England primary school, a village hall with bowls club and various good walks in the area, and tennis courts. The parish church is at Holywell.

The Pike and Eel at Overcote Ferry is a 300 year old inn beside the Great Ouse with its own moorings and marina.

The Villager is the local newsletter of the area, a copy of which is delivered free to every household in the parish of Holywell-cum-Needingworth.

There is a significant aggregate extraction operation based just to the east of Needingworth. The quarry will be turned into wetland with the co-operation of the RSPB. The resulting broad acres of wetland will constitute half of the United Kingdom's reedbed target.[1] 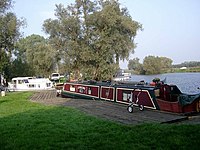 Riverboats on the Ouse