The name of the village originally meant "Pyda's Woodland Clearing".[1]

The village has one public house, The Mad Cat.

The village of Pidley has formed a single parish with that of neighbouring Fenton throughout its history. Together they were known as Pidele et Fenton in the 13th century, and Pidley has been variously listed as Pidel, Puddele, and Pydele during the Middle Ages.

The manor was held by Ely Abbey until the Dissolution of the Monasteries, whereupon it passed to the Bishop of Ely.[2] 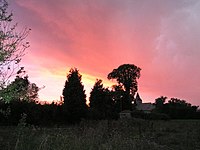 The mediæval parish church of All Saints stood on the site of the present church between at least the 12th century until it was pulled down in 1863. The Victorian replacement was constructed between 1864-5 using much of the original stone for the facing and has a west tower with spire. The only features surviving from the original church are a 14th-century window reset in the vestry, and a circular sundial in the north wall.[2] 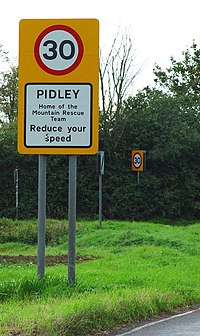 Pidley is home to the Pidley Mountain Rescue Team, a charity which does not actually carry out mountain rescue, since the area is one of the flattest in the country, but which raises money for people with disabilities.[3]