Ripponden is the main settlement in a small group of villages (Barkisland, Ripponden, Rishworth and Soyland) whose citizens are represented on Ripponden Parish Council.[3]

Ripponden and its villages were formerly served by the Rishworth branch line from Sowerby Bridge; Ripponden and Barkisland railway station closed to passengers in 1929 and the line was closed completely in 1958.[4]

The area is of archaeological note as it is rich in neolithic and bronze age remains.[5] At nearby Ringstone Edge can be found a small stone circle.[6] 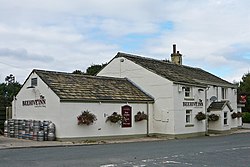 Ripponden is the terminus of the annual Sowerby Bridge Rushbearing Festival.[7]

The village is on the route of the Calderdale Way, a 50-mile circular walk around the hills and valleys of Calderdale.[8]

The Old Bridge Inn[9] in the village is the home of an annual pork pie competition.[10][11][12] The Old Bridge, or Waterloo Bridge, near the Inn is on the old packhorse road through the village and is also known as the Packhorse Bridge.[13]

On 6 July 2014, Stage 2 of the 2014 Tour de France, from York to Sheffield, passed through the village. On leaving Ripponden, riders undertook the third climb of the stage, the Category 3 Côte de Ripponden: 1,400 yards long with an average gradient of 8.6%.

Sir Norman Howard Bottomley, Air Chief Marshal of the RAF and Commander-in-Chief of RAF Bomber Command in 1945, was born in Ripponden in 1891.[14]

Nobel Prize–winning physicist Prof Richard Feynman was a regular visitor to the village in the 1960s-1980s, with his wife who was born locally. He also spent significant time in nearby Mill Bank.[15]