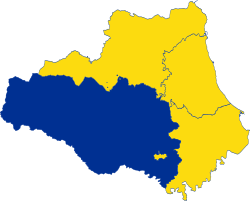 Darlington Ward is one of the Wards of County Durham, located in the south-west of the county. It is named after the town of Darlington which it contains. It is bounded to the south by Yorkshire; to the west by Cumberland and Westmorland; to the north by Chester Ward; to the east by Easington Ward; and to the south-east by Stockton Ward. Darlington Ward has a population of 267,074 in 2011.


Additionally, the township of Cornsay in the ancient parish of Lanchester forms part of Darlington Ward.