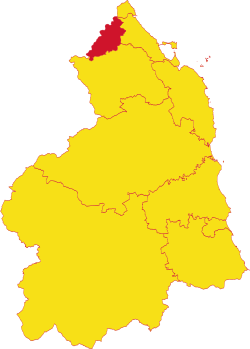 Norhamshire, shown as a ward of Northumberland

Norhamshire is an exclave of the County of Durham, locally situated in Northumberland. It was first mentioned in 995, when it formed part of the lands of the priory at Lindisfarne. When the lands north of the River Tees were partitioned into the counties of Northumberland and Durham it, along with Bedlingtonshire and Islandshire, stayed under the jurisdiction of Durham despite being north of the River Tyne.

After the passing of the Counties (Detached Parts) Act 1844, it was treated as the Hundred of Norham in Northumberland, to which it had already been united for Parliamentary purposes by the Reform Act 1832. The district originated as the single ancient parish of Norham, comprising various townships - the townships became separate civil parishes in 1866. They are:

Elwick was also a (detached) township of the parish of Norham but was associated with Islandshire instead.
The population of Norhamshire was 1,721 in 2011.