Polesworth is a large village in the very north of Warwickshire. In the 2001 it had a population of 8,439, inclusive of the continuous villages of St Helena, Dordon and Hall End directly to the south.

The River Anker and the Coventry Canal run through Polesworth, and the A5 road runs nearby. Polesworth railway station is on the West Coast Main Line. In 2005, Polesworth received no train services due to the modernisation of the West Coast Mainline. Train services were replaced by a replacement bus service. The footbridge to the up platform was removed and has not been replaced. The station in 2011 only receives one northbound service each day (towards Tamworth). 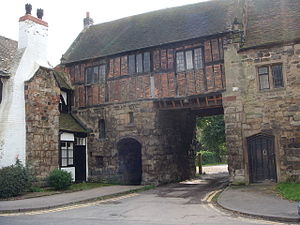 The name Polesworth is derived from the Old English "polesweorþ" from "pol", "pool" and "weorþ" uncertainly meaning dwelling or enclosure.

Polesworth was once the site of an abbey. Polesworth Abbey was founded in 827 by King Egbert of Wessex with his daughter Edith as Abbess; she was later considered a saint, Saint Editha. It prospered for 700 years but was disbanded as part of the Dissolution of the Monasteries. In 1544 the lands of the Abbey were granted by the Crown to Francis Goodere, who used the stones of the Abbey to build a manor house; Polesworth Hall.

Henry Goodere, son of Francis, was a patron of the arts and Polesworth Hall was a centre of culture during the Elizabethan era. The poet Michael Drayton was in the service of the Goodere family around 1580, and his works contain allusions to Polesworth and the River Anker (Brink, 1990). It is rumoured that William Shakespeare also spent some time as a fellow page boy here and they remained companions in adult life. Polesworth Hall no longer exists, as it was demolished in the 1860s.

In around 1509 Thomas Cockayne constructed Pooley Hall, which today includes some of the oldest brickwork in the country. The hall still exists and overlooks Pooley View. That part of the hall known as Pooley Farm was once owned by Edwin Starr, famous for the song War.

When the Coventry Canal was built through Polesworth in the 1770s, the village developed a coal-mining and clay industry and the population underwent rapid growth. A lime kiln became a focal point along the canal; however was demolished in the 1980s.

During the Second World War, opencast coal-mining devastated the surrounding countryside, and caused the river Anker to be diverted. The former opencast site is now a public park and the river now flows on its original course. Industry is now gone and Polesworth serves mainly as a small commuter town for nearby Warwickshire towns such as Nuneaton, Lichfield, Sutton Coldfield, Birmingham and Coventry, and Tamworth.