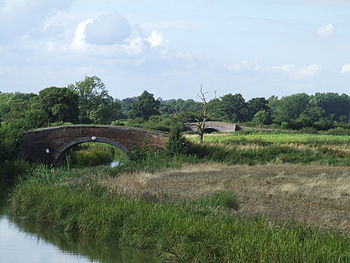 The Ashby Canal near Congerstone

The Ashby-de-la-Zouch Canal is a 31-mile long canal in Leicestershire and Warwickshire which was built to connect the mining district around Moira, just outside the town of Ashby-de-la-Zouch, with the Coventry Canal at Bedworth in Warwickshire. It was opened in 1804, and a number of tramways were constructed at its northern end, to service collieries. The canal was taken over by the Midland Railway in 1846, but remained profitable until the 1890s, after which it steadily declined.

Around nine miles of the canal's length passed through the Leicestershire coal field, and although this brought business to the canal, it was heavily affected by subsidence, with the result that this section from Moira, southwards to Snarestone, was progressively closed in 1944, 1957 and 1966, leaving just 22 miles of navigable canal.

The abandoned section is the subject of a restoration project and is the first canal where a new section has been authorised under the Transport and Works Act 1992. as some of the original route has been infilled and built over, and restoration therefore involves construction on a new route through the centre of Measham. It is hoped that all but the final one mile section of the canal can be re-opened. An isolated section near Moira Furnace and the National Forest visitor centre was opened between 1999 and 2005, and is the location for an annual trailboat festival. 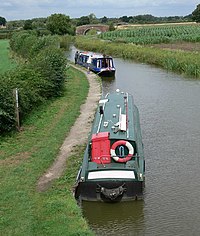 The Canal from Congerstone Bridge

The canal starts at a junction with the Coventry Canal just outside Bedworth and travels north-east for about 7 miles through the town of Hinckley. It then continues to run north through largely rural and remote countryside for another 15 miles until reaching its terminus at Snarestone. Near Sutton Cheney Wharf, it passes the foot of Ambion Hill, the site of the Battle of Bosworth Field. At Shackerstone, it passes the station that is the headquarters of the Battlefield Line Railway.

In the last half of the eighteenth century there had been an increasing need for transport to exploit the coal reserves at Ashby Wolds and lime from the quarries north of Ashby-de-la-Zouch. The first proposal was for a canal running from Burton-on-Trent on the upper River Trent to Marston on the Coventry Canal. A second suggestion was for a canal from Ashby Wolds to the Coventry Canal at Griff. William Jessop later proposed a canal and tramway between Breedon and the Trent, with a connecting link to the Trent and Mersey Canal in 1787, which also came to nothing, as did proposals in 1790 and 1791.

In October 1792, Robert Whitworth revised his plan from 1781 and presented a proposal for a level canal from Griff, near Nuneaton, to Ashby Wolds, which would cost £63,402. From there it would climb 139 feet to a summit which would be supplied with water by a steam pumping engine. After a further 5 miles the summit level would descend through 84 feet to level branches, which would serve collieries at Ticknall, Coleorton, Cloud Hill, near Breedon-on-the-Hill, and Staunton Harold. A private Act of Parliament was obtained in May 1794. Work began soon after.

By October 1796, it had become obvious that the costs of construction had been seriously underestimated, and around one quarter of the shareholders had not honoured their pledges, and so the company had less capital than expected. As a result, the company determined to replace the intended branch canals with tramways, which endeavour was itself beset by increasing costs. 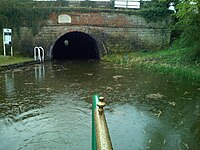 The tramways were completed towards the end of 1802, and the level section of the canal from Marston to Moira was opened on 19 April 1804. The only lock was a stop lock at Marston, to protect the water supplies. By this time, the finances were not in good shape, as failures of the shareholders to honour calls on the shares had resulted in the company borrowing £21,539 to complete the work, and the mines were still not producing coal at a rate which would have made the canal profitable. The final cost of construction was around £184,070. The main source of traffic was from the pits at Moira, which steadily expanded, particularly in the 1820s, enabling the loans to be paid off between 1820 and 1827, and the first dividend to be paid in 1828.[1] In 1819, the company and the Coventry Canal agreed to convert the stop lock between the canals so that it was only suitable for narrow boats, and they shared the cost of conversion. The reasons for this are unclear, since wide-beamed boats continued to operate on the canal, but could not move further afield. Profitability was improved after the company sent Crossley, their engineer, on a fact-finding tour of local canals in 1822. He investigated tolls for coal, and the system of drawbacks which some of them used. Such a system was them implemented on the Ashby, whereby coal travelling the whole length of the canal was subject to a refund or drawback on the tolls. The effect was immediate, with the amount of coal qualifying for the drawback rising five-fold between 1824 and 1828, from 4,367 to 22,011 tons, and reaching 37,316 tons in 1837.[2]

In 1845, the Midland Railway were planning to build the Atherstone, Ashby-de-la-Zouch and Burton-on-Trent railway, and offered to buy the canal for £110,000. They agreed to maintain the canal until the railway was built, but there was no longer-term agreement on its future. Since most of the coal which used the canal travelled onwards via the Coventry Canal and the Oxford Canal, these companies faced a big drop in toll revenues, and fought hard to get the Midland Railway's bill amended. As well as a commitment to maintaining the canal, they also had a clause added which allowed the Coventry Canal to undertake maintenance and charge the railway for the work if the railway company failed in their obligations. An Act of Parliament was passed in 1846, which authorised the takeover, but the railway line as envisioned was not built.[3] It was nearly 30 years later that serious railway competition arrived, when the London and North Western Railway and the Midland Railway jointly opened the Ashby and Nuneaton Joint Railway from Overseal to Nuneaton in 1873. The following year, the Midland reused the section of tramway from Ashby to Worthington, Leicestershire,[4] enlarging the Old Parks tunnel, as part of a line that ran through Melbourne to Derby. The remainder of the tramway lines were kept for local use, with the branch to Ticknall closing in 1915.

The canal continued to carry significant tonnages, which gradually decreased, from 138,117 tons in 1862 to 113,659 tons in 1882. After that, the decline was more rapid, dropping to 33,329 tons by 1893.[4] By the 1890s, the railway owners had reduced maintenance on the canal, knowing that the Coventry Canal were unlikely to invoke their powers under the 1846 Act, since they too were in trouble. On 2 January 1918, there was a major breach in the canal when an embankment some two miles below Moira collapsed. The cost of reinstatement was £9,864, and the canal reopened on 23 July 1919. The upper section was increasingly affected by subsidence from the coal mining. Despite this, the Moira Coal Company shipped 20,807 tons along the canal in 1943, and the total tonnage on the canal that year was 43,733 tons. The owners, by now the London, Midland and Scottish Railway, tried to give the canal to the Coventry Canal company in 1944, but they refused it unless there were money to fund the maintenance. The 2½-mile section from Moira to Donisthorpe was promptly abandoned, allowing the Moira Coal Company to mine under its course. Another five miles were closed in 1957, under an Act of Parliament obtained by the British Transport Commission,[5] and the Measham to Snarestone section was closed in 1966, even though coal was regularly loaded there.[6]

Traces of the old railway can still be seen, particularly towards Ticknall. A low embankment, still with some stone sleeper blocks crosses a field and a tunnel passes under the drive to Calke Abbey. There is also an arch bridge in Ticknall village where the line ran into the quarries.

The closure of the canal north of Snarestone in 1966 led to the formation of the Ashby Canal Association, to ensure that no more be closed and to work towards the reopening of the northern section.[7] In 1992, the engineering consultants W. S. Atkins produced a feasibility study for the restoration of the canal between Snarestone and Moira, which concluded that there were no obstacles which could not be resolved. They also recommended that the reconstruction should be suitable for broad-beam boats, rather than 7-foot narrow boats, as this would have ecological advantages.[8] By 1997, the council had bought much of the route, and had located two funding packages worth over £1 million. However, they failed to reach agreement with one landowner over the purchase of a parcel of land, and because the deadlines were not met, the funding was lost. They therefore resolved to obtain an order under the Transport and Works Act 1992, which would allow them to use compulsory purchase powers if necessary.[9] In order to promote and assist the restoration of the canal north of Snarestone, the Ashby Canal Trust was set up in 2000: a limited company owned by the Ashby Canal Association, the Canal And Rivers Trust, the Inland Waterways Association and various local councils.[10]

Since the mining industry in the area has ceased, there have been fewer problems with subsidence, and the current plans are to re-open the canal to the National Forest visitor centre at Moira, about a mile short of its original terminus at Spring Cottage. Between 1999 and 2005, a stretch of the canal near Moira was restored and re-filled with water,[11] passing the historic Moira Furnace, a blast furnace from the 19th century which has been converted to provide visitor facilities including a craft centre, museum and cafe. The restored stretch is a mile and a half long, and includes a new lock built to overcome the problems caused by mining subsidence.[12] Below the restored section, the way forward has been blocked by the construction of the A42 main road across the canal's formation.

Further reconstruction and aacquisition work continues with a view to lengthening the canal.