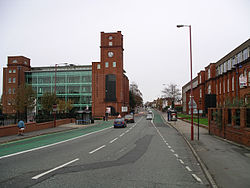 Foleshill is an ancient parish in Warwickshire that forms a suburb of Coventry. Longford, Courthouse Green and Rowley Green are to its north and Keresley is to its west. The population of the ward at the 2011 census was 19,943.[1]

Development of industries within the area such as the Ordnance Works, J&J Cash Ltd (silk ribbon weaving), and various brick works; was aided by the existence of the Coventry to Nuneaton railway and the Coventry Canal.

In July 1905, Courtaulds Ltd opened its factory in Foleshill and grew to become a world leader in the production of artificial fibres, requiring a considerable expansion of the facility over the following years. The now-demolished Courtaulds chimney was reputed to be the tallest in England when it was erected in 1924. It stood 365 feet (111 m) tall, was built on 15 feet (4.5 m) - deep foundations, had a base diameter of 26 feet (8 m) tapering to 16 feet (5 m) at the top, and consisted of 917,000 bricks weighing a total of 4,000 tons (4,064 metric tons). Tower Court, formerly one of the Courtaulds buildings, is now used as offices.

Jaguar Cars had a factory in the area in the 1930s and 1940s. Riley Cars were based in Foleshill from 1916 to 1948, when production was moved to the MG factory in Abingdon, Berkshire.

Challenge, an early cycle and car manufacturer, moved into new premises which included an impressive red-brick office building,[2] which can still be seen on Foleshill Road.

The original Coventry and Warwickshire Hospital was built in the mid-1860s in the Gothic style and accommodating just 60 beds, which at the time was sufficient for Coventry's requirements. The hospital was extended to cope with the increasing needs of the developing city, and what remained of the original building was destroyed by Luftwaffe bombing during World War II.

Filmmaker Michael Moore was proclaimed "Lord Moore of Foleshill" for $8,000 paid with an American Express card as part of a bit in episode 4 of TV Nation.[3]

In the post-WW2 period the area acquired a large ethnic minority population. It is now the only one of the 18 wards in Coventry where non-whites form a majority of the population (at the 2001 census); they are mainly South Asian Muslims and Sikhs.