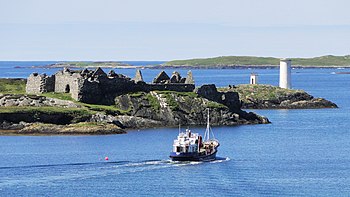 Inishbofin harbour; Port Island with Cromwell's Barracks and the light on Gun Rock, with Inishark in the background 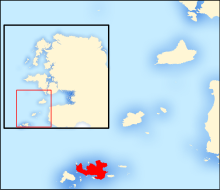 Inishbofin is a small island of County Mayo off the coast of Connemara, County Galway. It has around 160 inhabitants and is a popular tourist destination.

The island's English name Inishbofin is derived from the Irish name Inis Bó Finne ('Island of the White Cow'). There are several legends concerning the origins of the island's name.[1] According to one legend, the island was actually a floating, insubstantial place until some fishermen landed on it in a fog. By bringing fire onto the island, they dispelled the magic, fixing it in place. They then saw an old woman driving a white cow, which turned into a rock when the woman struck it with a stick.[1][2]:23

The Irish name has also been anglicised as 'Innisboffin' and 'Boffin' or 'Bophin' island.[3]

Inishbofin lies around five miles off the Connemara coast opposite of Ballinakill Harbour and Cleggan Bay. It is separated by a narrow channel from Inishark (Sark island).[3] It is about 3½ miles long and two miles wide. The highest point is in the Westquarter and rises to 292 feet.[4]

Much of the island is a Special Area of Conservation (due to the presence of corn crakes and seals).[5] An aspect of the island is that it has no trees or forests whatsoever. Any wood was cut down and used as heating fuel. Because of the salt-enriched air, trees were never able to re-establish themselves.

It is not known when Inishbofin was first settled. There is no evidence of a Mesolithic, and only circumstantial evidence of a significant Neolithic presence.[6] Although there are pre-historic field systems, their age has not been definitely established[2]:25 and could be anywhere between Bronze Age and early mediæval.[7] Neolithic and Bronze Age monuments, found in significant numbers on the Connemara mainland, are conspicuous by their absence.[6] Definite traces of human settlement are available only from the Iron Age onwards, such as the remains of promontory ring forts like 'Dun Mor'.[7]

Around 665, Saint Colmán founded a monastery on Inishbofin.[1] According to some accounts, Guairim of Inisbofin was the ruler of the island when Colmán came here. The Annals of the Four Masters report the monastery's Abbots until the early 10th century (see below).[2]:23

The island belonged to the O'Flahertys until 1380, when the O'Malleys captured it.[2]:23 In the 16th century, according to local tradition, a Spanish pirate or Barbary corsair named Alonzo Bosco built a stronghold on Port Island, where the Cromwellian fort stands today. According to the tales he raided the Irish coast and shipping in the area. "Don" Bosco was supposed to have been an ally of Gráinne O'Malley, chieftain of the O'Malley clan and 'Ireland's pirate queen'. One story had them stretching a defensive iron chain across Inishbofin's harbour entrance to make it impassable to enemy ships. Across the harbour entrance from Port Island sits 'Dún Gráinne', the fort where Gráinne O'Malley supposedly lived.[1][2]:23,25

Eventually, Elizabethean forces took the island.[1] In 1609, both Inishbofin and Inishark were the property of the Earl (or Marquis) of Clanricard (alternatively spelled Clanricarde or Clanrickard).[1][2]:23 The Marquis was of the de Burgo (Burke) family.[8]

In the years of war following the Irish rebellion of 1641, the island was an important staging posts for arms deliveries to the Irish Catholic rebels and their allies, the Royalists, from the Duke of Lorraine. The Royalists were supporters of King Charles I in the English Civil War against the Parliamentarians. In August 1649, the Parliamentarian forces under Oliver Cromwell had landed in Ireland and over the next few years conquered it. In early 1653, Cromwellian warships threatened to bombard the island and Inishbofin surrendered on 14 February to Sir John Reynolds. It was thus one of the last Royalist strongholds to fall to Cromwell's army. According to some accounts, after Galway had fallen in 1652, Rory O'Moore, one of the initiators of the 1641 rebellion fled to Inishbofin, where he lived in a cave.[2]:25

After taking the island, the Parliamentary forces turned Inishbofin into a prison for Catholic priests arrested elsewhere in Ireland.[2]:23 Most of the star fort commanding the harbour dates from this period.[2]:23 It is known today as "Cromwell's Barracks" and was used, aside from its role as a prison, to protect the harbour against pirates and Dutch raiders (with whom the Protectorate was at war).[3][5] At the time, a considerable fishery and whaling activity was based on the island.[3]

In 1690, the fort was garrisoned during the Williamite War in Ireland by Jacobites, supporters of King James II.[2]:23 Commanded by one Colonel O'Riordan, they surrendered to King William's forces soon after the fall of Galway in 1691.[2]:23[3]

In 1779, a British ship carrying officers and new recruits of the 84th Regiment of Foot and the King's Orange Rangers, diverted from their planned course from Newfoundland to New York during the American War of Independence, was blown off course and wrecked at Inishbofin (Royal Oak Cove). 56 of the soldiers died, many of the survivors deserted and were hunted down by troops from Westport.[2]:25

Around 1830, Inishbofin passed from the possession of the Clanricards to the Browne family of Westport[2]:23, descendants of the O'Malleys. In 1837 it belonged to Howe Browne, 2nd Marquess of Sligo.[3]

Circa 1855, George Browne sold the island to Henry William Wilberforce. Cyril Allies, an English Catholic, bought it from Wilberforce in 1876, after having held it in mortgage since 1859.[9] It was eventually acquired by the Congested Districts Board for Ireland (later known as the Land Commission).[2]:23 The exact date is not known, but negotiations were "well advanced"[10] by 1910. 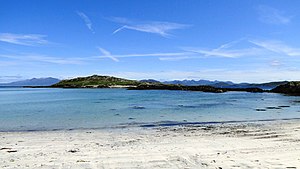 Dumhach Beach in the east of Inishbofin

Today, tourism is the island's main industry. There are three hotels and a hostel on the island. Inishbofin offers scuba diving, walking trails, cycling and sea angling.[12]

Inishbofin can be reached by ferry from the pier in Cleggan. There is also a helipad, and an airstrip has been built on the island.

A community centre includes a small island library. It provides a reference and local studies collection with information on the history and heritage of the area. There is also free internet access. 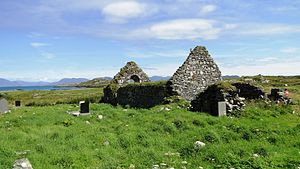 Ruins of a 13th-century church in St Colman's Cemetery with the mountains of Connemara in the background.

Inishbofin was mentioned at some length by Irish artist and author Robert Gibbings, writing in 1946.[14] He also referred in passing to some Inishbofin placenames that appear to be no longer extant, suggesting that the villages have now vanished. These include: Alladoon, Bunamullen, Cooltra, Mweelanbwee, Ooghnagunnel. Nobel Laureate Seamus Heaney's poem "Seeing Things" begins with a boat ride to Inishbofin. "Inishbofin on a Sunday Morning. / Sunlight, turfsmoke, seagulls, boatslip, diesel".[15] The island served as the setting for Deborah Tall's 1987 book, The Island of the White Cow.[16]

Inishbofin in the Annals