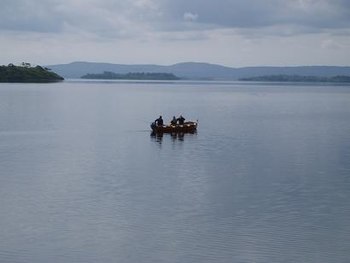 Fishermen near Cong on Lough Corrib

Lough Corrib (Irish: Loch Coirib) is a lake in the west of the Republic of Ireland, lying mostly in County Galway, with a small area of its north-east corner in County Mayo. The River Corrib or Galway River connects the lough to the sea at Galway. Corrib is the largest lough in the island of Ireland after Lough Neagh and covers 68 square miles.

The first canal on the island of Ireland was cut in the 12th century. Known as the Friar's Cut, it allowed boats to pass from Lough Corrib to the sea at Galway.

William Wilde, father of Oscar Wilde wrote a book about the lake, first published in 1867. He built a summerhouse on the banks of the lake, called Moytura House.

Lough Corrib was designated a Ramsar site in 1996. It has also been designated a Special Area of Conservation.

Loch Coirib is derived from an old Irish name of Loch Oirbsean. According to place-name lore, this refers to Oirbsen or Oirbsiu—another name for the Tuatha Dé Danann figure Manannán mac Lir—who is believed to have been a god of the sea. In Irish the lough is also called An Choirib ("the Corrib").

Surveys have been undertaken since 2007 by a local surveyor / cartographer to create up to date charts of Lough Corrib.[1] These have uncovered a great many objects of historical significance which have been investigated by the Underwater Archaeology Unit of the National Monuments Service. These include many Bronze Age and Iron Age vessels [Dugout Canoes], the "Annaghkeen Boat" being 40 ft in length and beautifully carved,[2] the "Carrowmoreknock Boat" an amazingly preserved 10th century vessel carrying 3 Viking battleaxes,[3] and the wreck of a Victorian pleasure yacht. The lake is now of international importance as a marine archaeological site. All historic wrecks in the lake are protected and a license to dive them is required from the National Monuments Service.[4]

There is an abundance of wildlife in Lough Corrib including birds and hawks, otters, mink, stoat, frogs, bats and much more. The dawn chorus in early spring is spectacular to listen to.

Lough Corrib can be divided into two parts: a smaller shallower basin to the south and a larger deeper basin to the north. These two parts are connected by a narrow channel. In the southern and eastern parts of the lake, the lake bed is dominated by limestone bedrock covered by deposits of precipitated marl. The surrounding land is mostly pastoral farmland to the south and east and bog to the west and north. In addition to the lake basis, some areas of scientific interest adjoining the lake, e.g. woodland, callows grassland, and raised bog, have been incorporated into the Special Area of Conservation. 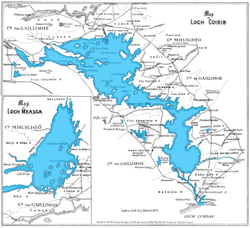 A map taken from the Admiralty Chart made in 1846

As well as being an internationally recognised attraction for tourists and fisherman, Lough Corrib has recently become more famous for its many unwelcome visitors. In early 2007, large numbers of the protozoan parasite Cryptosporidium were detected in water from the lake, leading to contamination of the public water supply in the City of Galway, and an outbreak of cryptosporidiosis. Another unwelcome visitor is the highly invasive species Lagarosiphon major (also known as 'curly-leaved waterweed' or 'South African pondweed') which is destroying fish habitat, and the zebra mussel.

On 21 March 2007, Cryptosporidium was confirmed to be present in the drinking water of Galway, Moycullen, Oughterard and Headford, which had been instructed six days earlier to boil their water before drinking. The water taken from Lough Corrib was likely contaminated by migration of animal and human faeces. Dick Roche, the Minister of the Environment, announced a further allocation of €48 million to tackle the issue.

Galway City Council announced a one-for-one scheme on 10 April 2007, whereby they would carry the cost of a second bottle of water, if one is purchased. Other measures include upgrading existing water treatment and filtration systems, as well as the projected importing of water from nearby Luimnagh, Tuam, County Galway. This plant at Luimnagh has modern facilities for Cryptosporidium eradication and filtration.

Islands in the lough 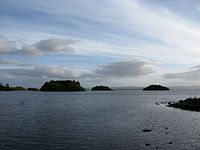 Lough Corrib is reputed to have 365 islands; one for every day of the year. A recent figure determined by the creator of charts of the lake is 1,327. [6]

The most famous of the islands is Inchagoil Island, midway between Cong and Oughterard. It is one of the largest of the many wooded islands along Lough Corrib. The island has spectacular views of the Maumturk range, 'Joyce Country' and the mountains of Connemara. There are some secluded beaches and enchanting woods with a variety of walks around the island. There is evidence of an early monastic settlement which still mostly remains a mystery. There are two churches remaining, St Patrick's and the 12th-century church known as the "saints" church. There are several paths around the island, an old cemetery and remains of four or five cottages which housed the few inhabitants.

Another noted island is Caislean-na-Circe, between Maam and Doon. This section of Lough Corrib is free from islands except for the rock on which the ancient Hen's Castle of the O'Connor's and the O'Flaherty's stands. The castle was home of the pirate Queen Gráinne O'Malley, who lived in the time of Queen Elizabeth I. In 1225, the Lord Justice caused Odo O'Flatherty to give up Kirk Castle to Odo O'Connor, King of Connaught; for assurance of his fidelity. Castle of the Hen is considered to be the oldest fortress of its kind in Ireland, and it is undoubtedly one of the best built. When first built and well-defended, with good food stores, this castle must have seemed impregnable to any arriving with ill intent. The rocks slope abruptly into the water on all sides. It is only accessible in a few places. The castle is steeped in history and legend. Cruises on the lake can be enjoyed starting from Cong, Ashford Castle, Galway City, and Oughterard.

The Annals of Inisfallen record: