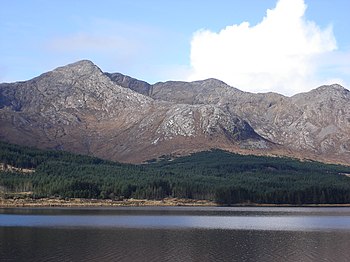 Bencorr from across Lough Inagh

The Twelve Bens, or Twelve Pins (Irish: Na Beanna Beola), form a mountain range of sharp-peaked quartzite mountains, in northeast of Roundstone in Connemara; a region of County Galway famed for its wild beauty.

There is disagreement about which mountains are the twelve from which the range takes its name. In the Irish language In Irish the range is simply na Beanna Beola, meaning "the peaks of Beola" (after a giant and chieftain of the legendary Fir Bolg). Roderic O'Flaherty, who wrote in 1684 of the twelve high mountaines of Bennabeola, but he did not name the twelve. His number has stuck in the English name.

The peaks are forbidding in their aspect though dedicated fell runners attempt to hike all twelve peaks in a single day. Even for those less hardened than the fell-runners, the Twelve Bens provide excellent walking and climbing opportunities for outdoor enthusiasts.

The rainfall here is heavy and frequent and the water running from the steep-sided mountains produces an abundance of small trickles and burns which descend into wide-bottomed valleys below the Twelve Bens to join larger streams with riffles and pools.

The highest point in the Twelve Bens is Benbaun at 2,392 feet (County Galway's county top too). Topographically, this range is partnered with the Maumturks range on the other side of the lonely Glen Inagh (and the route of Western Way long distance path).

The following table lists the 12 highest mountain peaks of the Twelve Bens Mountains, all with a topographic elevation of at least 1,690 feet). There are a number of mountains higher than Benglenisky, but do not have sufficient prominence to be included in this list. 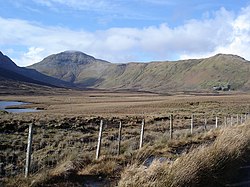 Benbaun from north of Lough Inagh