Cautley Spout in Yorkshire is one of the United Kingdom's highest waterfalls, in which the River Rawthey falls in one drop 249 feet, this just one stage in a 650-foot fall here. It is the highest waterfall in the Pennines above ground, though Gaping Gill on Ingleborough falls a greater distance into a pothole.

It is in form of a broken cascade of falls which tumble a total of 650 feet down a cliff face at the head of a wild and bleak glacial valley that comes down from a high Pennine plateau called The Calf. It is located in the Howgill Fells, in the West Riding of Yorkshire, on the western edge of the Yorkshire Dales National Park. The waterfall is found just north of the small West Riding town of Sedbergh. This fall is one of the few cascade falls in the Pennines, where most are either tiered or plunge falls. 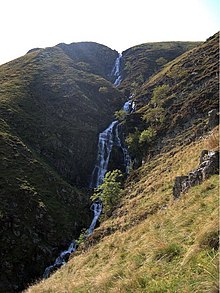 The upper section of Cautley Spout