Monkton Farleigh is a village and parish in the Bradford Hundred of Wiltshire, three miles from Bradford-on-Avon, and five miles from the city of Bath. The parish includes the hamlets of Farleigh Wick and Pinckney Green.

It is known for its underground mines of Bath Stone, which were converted into one of the largest Ministry of Defence underground ammunition stores in the country.[2]

The civil parish has 34 listed buildings, including:[3]

Woodland at Inwood is a biological Site of Special Scientific Interest.[8] 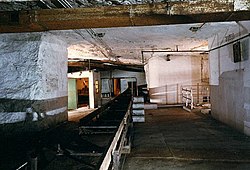 District 20 of the depot, showing the conveyor for moving munitions

In the 1930s, it was recognised that there was a need to provide secure storage for munitions across the United Kingdom. The proposal was to create three Central Ammunition Depots (CADs): one in the north (Longtown, Cumberland); one in the Midlands (Nesscliffe, Shropshire); and one in the south, namely CAD Monkton Farleigh, which was also known as CAD Corsham.[9]

The easily hewn Bath stone, a form of limestone, had created a number of large, horizontal, and relatively dry quarries around Corsham. Monkton Farleigh quarry was renovated from the late 1930s by the Royal Engineers as one of the three major stockpiles.[3]

In November 1937 the Great Western Railway were contracted to build a 1,000-foot-long raised twin-loading platform at Shockerwick, with two sidings from the adjacent Bristol-London mainline branching off just outside the eastern entrance to the Box Tunnel. Thirty feet below and at right angles to this point, the War Office had built a narrow gauge wagon sorting yard. This was attached by a 1¼-mile tunnel built by The Cementation Company, descending at a rate of 1:8.5 to the Central Ammunition Depot, housed in the former mine workings. The whole logistics operation was designed to cope with a maximum of 1,000 tons of ammunition a day.[10]

The narrow-gauge trucks would descend from the platform to the tunnel, where a heavy-duty conveyor belt would propel the ammunition directly to the appropriate storage gallery. At any given time the depot was either taking in ammunition or sending it out, never both simultaneously. The construction design meant that an explosive accident or detonation inside any one of the stores would not propagate throughout the ammunition storehouse. The conveyor belt, and the original cable-way used as a temporary installation while the tunnel was being built, ran continuously for 30 days in the run-up to D-Day.[10]

CAD Monkton Farleigh closed at the end of hostilities, although was kept in an operational condition until the 1950s. The sidings were then cleared, and not used again until the mid-1980s when a museum opened for a short period on the site. Today the north end of the tunnel is sealed by a concrete and rubble installation, while the former mine/CAD is used for secure commercial document storage.[10]