The island gained its name by a factory located on it which processed sea water in order to extract sea salt. By the early 18th century the sea salt was often mixed with rock salt (often smuggled onto the island) to increase the quality of the salt produced by the factory. The factory closed in 1775.

Another building no longer standing on the island was the Stanley Sailor's Hospital. This hospital was set up in 1871 by a local philanthropist and initially only treated sailors although it quickly became a general hospital. It was taken over by the National Health Service in 1948 and closed its doors in 1987. 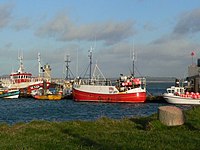 Three lighthouses have stood on Salt Island. The current lighthouse, the Holyhead Mail Pier Light, is a conical white house which was built by the civil engineer John Rennie the Elder in 1821. It is probably the second oldest lighthouse in Wales, after Point of Ayr Lighthouse.

There is a matching tower in Howth, County Dublin, also designed by Rennie, for the other terminal of the Irish packet steamer. The lighthouse is of national significance as one of John Rennie's surviving works. He was one of the most eminent engineers of the world’s first Industrial Revolution. Of particular importance is the early date of the lighthouse lantern, which was originally lit by gas. Before the conversion to electricity a gas works was located on the island to power the lighthouse, the piers and even part of Holyhead itself. The works were constructed at a cost of £130,000, an astronomical sum at the time. The tower survives intact and has beautifully curving gallery railings, similar to those at Bardsey Island Lighthouse. It is no longer in use, although it is used as a navigation reference for sailors.

The main pier on the island, the Admiralty Pier, was opened in 1821. At around 300 yards long it extends east into the sea and has been used to handle ferry traffic since it was opened. Due to its important historical links between Great Britain and Ireland the pier has twice had royal visitors, once on 7 August 1821 when King George IV arrived from Ireland and once in 1898 when Queen Victoria set sail for her last voyage to Ireland.

An inner arm, pairing the existing 5,100 feet long breakwater (built between 1848 and 1876) was planned from Salt Island. The isolated broad gauge tramway railway from the Holyhead Mountain quarry used to build the former had a branch to Salt Island, by way of Newry Beach, to facilitate this. Although started with an intention to be 2,100 feet long, the inner arm was never developed beyond a rubble spit at the northern tip of the island. Stone blocks that supported this tramway are still to be found along the upper seafront of Newry Beach. No trace remains of the, presumably, wooden viaduct across the Borth Sach inlet which provided access to the island. During the nineteen nineties the remains of rails were still to be found amongst the large boulders deposited as the foundations for the inner arm.

In more recent times, starting in February 2001, the island was expanded into the sea by the process of land reclamation. In total 11 acres was gained at a cost of £10 million. An average of 7,000 tons of rock and mud was extracted each day during the process. 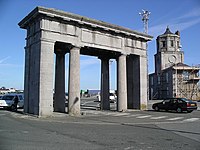 Salt Island is part of the port of Holyhead and almost the whole extent of the island is used as a passenger, car and freight terminal and berths for ferries to and from Ireland. Both Irish Ferries and Stena Line sail from Salt Island to Dublin port and to Dún Laoghaire. The Holyhead lifeboat station is on the island. The Admiralty Arch, the end of the A5 which links London to Holyhead is located very close to the southern tip of the island. This was opened in 1826 when the last section of the road the Menai Suspension Bridge was completed. There is a beach on the island which was open to the public but was shut in 2003 due to the increasing terror threat and still hasn't reopened. Access to the island as a whole is strictly monitored and is virtually impossible for pedestrians to enter.