Brownhills is a town in Staffordshire within the Black Country. The town stands on the edge of Cannock Chase near the large artificial lake Chasewater, six miles north-east of Walsall and a similar distance south-west of Lichfield. Its neighbours are the ancient villages of Pelsall and Stonnall.

The town lies on the ancient Watling Street, but is not recorded before the 17th century, although Ogley Hay, which in modern times is a district of the town, is recorded as a settlement in the Domesday Book.

Brownhills quickly grew around the coal mining industry, especially after it became linked to the canal and railway networks in the mid-19th century, and by the end of the century had grown from a hamlet of only 300 inhabitants to a town with a population of over 13,000, of whom the vast majority were employed in the coal industry. Mining remained the town's principal industry until the 1950s, but the subsequent closure of the area's pits led to a severe economic decline which has continued until the present day. The local authority has instituted a regeneration programme which it is hoped will revive the town's fortunes, providing better transport and leisure facilities.

Brownhills stands at the edge of Cannock Chase. A small river called Crane Brook flows slightly to the east of Brownhills,[1] but the only significant bodies of water in the area are human-made, namely the canal and the 750-acre reservoir, Chasewater, which lies to the north, between Brownhills and Cannock Chase. The reservoir was constructed in the 18th century and reshaped by reclamation schemes as recently as the 1970s.[2] 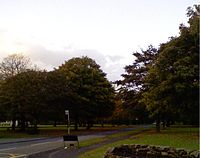 Immediately to the west of the town is Brownhills Common, a 100-acre heathland which once formed part of Cannock Forest (also known as "Canke Wood").[3] Although the forest was felled in the 15th and 16th centuries, the spread of heather and the grazing of sheep led to the creation of a huge area of heathland. The area was affected by mine workings but has now returned to a more natural state and lizards and dragonflies may be observed.[4]

The area now supports various habitat types, with the heathland mixing with marshy grassland, with scattered scrub and pools.[5] In 1926, when ownership of the Common was transferred to the local Council, a large area of barren land at the eastern end, closest to the town, was landscaped, with new trees planted.[6] Lying south of the Common, Birch Coppice is a large area of predominantly oak and birch woodland, which, although crossed by a now-dismantled railway line, mostly escaped the destruction caused to other wooded areas by mining and other industry.[7]

The Brownhills bridge across the canal

To the east lies the village of Stonnall and a large area of green belt land.[9]

The town is on several fault lines, the main one being the Vigo Fault, a branch of the larger Eastern Boundary Fault, which runs from Birmingham to Rugeley. On the western side of the fault, in the area of Brownhills Common, the marl is over 1,000 feet thinner than on the eastern side, bringing the coal seams significantly closer to the surface.[10] The presence of the faults and the effects of mining mean that subsidence has been a major problem in the area for many years.[11][12]

Early evidence of settlement around Brownhills includes an ancient burial mound and a guard post believed to date from Roman times and later dubbed Knaves Castle.[13][14] The name Brownhills, however, is not recorded before the 17th century. The most popular suggestion for the origin of the name is that it refers to the early mining spoil heaps which dotted the area.[15]

A village is first recorded here (as "Brownhill") on Robert Plot's 1680 map of Staffordshire, at which time it was a hamlet within the manor of Ogley Hay, which in turn was part of the parish of Norton Canes.[15] Ogley Hay itself had existed since at least the 11th century and is mentioned in the Domesday Book,[13] although the 1801 census lists it as having a population of only 8 people.[16] Beyond Ogley Hay lay Catshill, another hamlet which pre-dated Brownhills and which lay within the parish of Shenstone.

During the 17th century, shallow mine workings began to develop in the area and in 1759 a turnpike was erected in the Catshill area.[13] A local legend claims that Dick Turpin once vaulted the barricade on his horse to avoid paying the toll,[17] although this is demonstrably false as Turpin was executed in 1739, twenty years before the turnpike's construction. In 1794 Brownhills (now in the plural) was included in a list of local settlements mentioned in an Act of Parliament concerning canals in Staffordshire,[18] and three years later the Wyrley & Essington Canal, nicknamed the "Curly Wyrley" by the locals due to its winding course, was opened.[13][19] In 1799 Norton Pool, later to be renamed Chasewater, was created to serve as a reservoir for the canals.[14]

Early in the 19th century, a horse-drawn tram system connected the mines to the wharves on the canal. In response to the growing population of the area open land in Ogley Hay, up until then merely heathland, was enclosed and converted to farmland in 1838, the same year in which the area was first declared a parish, although no church was built for another 13 years.[14] Charles Foster Cotterill, a former Mayor of Walsall who had purchased the manor of Ogley Hay in 1836 upon the death of former lord Phineas Hussey, saw the potential of the area and sold off large tracts of his land for private farming and the construction of a flour mill and a foundry.[20] The remaining land of the former manor was progressively sold off through a series of indentures until 1846 when Cotterill sold the last 135 acres and moved to London.[21]

The South Staffordshire Railway reached Brownhills in 1850 and led to a huge expansion of the local mining operation and with it a population explosion in the area,[22] with the population increasing from 305 in 1801 to over 13,000 in 1891.[13] In 1858 a branch line was constructed through the heart of what was then the hamlet of Brownhills, which led to a migration of the population eastwards, leading to the formation of mining slums in the Ogley Hay area. Eventually a new town centre developed, complete with library and theatre.[14] This led to the gradual amalgamation of Brownhills, Ogley Hay and Catshill into one town.[23]

Mining was to remain the principal industry of Brownhills until the last pit closed in the 1950s.[24] During the 18th and 19th centuries the area known as Coppice Side was the hub of the mining industry, and the census of 1841 showed that over 80% of the population of the area which makes up modern Brownhills lived and worked there,[23] with up to ten pits active in the area at any one time.[25]

As in other mining areas, several men lost their lives in the Brownhills pits. Seven miners, including a boy aged 11, died in an accident in 1861, and in October 1930 an explosion at the Grove Colliery killed fourteen miners, ten of them from Brownhills.[7][26]

The Council House, now a health centre and library

After the First World War, the Urban District Council began a programme of urban improvement. Large areas of open farmland were purchased for the building of council houses, and a notorious slum area, Ogley Square, which had been declared unfit for human habitation, was demolished after a long legal dispute and the tenants rehoused. The final farmland within the boundaries of Brownhills was sold for redevelopment in 1952.[27]

By the time of the Second World War the mines of Brownhills, being amongst the oldest in the area, were largely exhausted,[28] and following the nationalisation of the mining industry the final pit on the Common was closed in the 1950s. Following the demise of the coalfield the town experienced a severe economic slump, with many high street shops closing down. A wave of new development in the 1960s and 1970s saw a new shopping precinct planned, which it was claimed would incorporate a cinema, bowling alley, hotel and bus station and would completely revitalise the town. Despite the developers' grandiose claims, the project was not a success and ultimately consisted solely of shopping units, many of which stood empty for up to five years.[29] There was little further development in the 1980s and 1990s, and the feeling of the local council is that the town centre is in need of improvement. To this end the council has created a "Townscape Masterplan" for the redevelopment of the town.[30]

The decline of the mining industry in the 1950s caused a severe economic slump in Brownhills, which continues to this day.

As of the 2001 census, Brownhills had 5,768 people in employment, of which the largest percentage (28.85%) worked in manufacturing, followed by retail (19.35%) and construction (8.93%). Compared to the national average, the town had a relatively high percentage of workers in the construction industry and a relatively low number in real estate and financial intermediation.

One of the town's largest employers is T & S Stores, a subsidiary of Tesco plc. Brownhills was formerly home to the wirings manufacturer Electrium's last UK-based factory, but this has closed, with manufacturing shifted overseas and commercial staff moved to a new site in Cannock. In 2006, the Electrium site was converted into a mixed-use facility dubbed Toll Point.

The High Street retains various independent shops, including a cobbler and a butcher, but is seen as in need of improvement. The local council's regeneration programme though includes extensive redevelopment of the High Street; the council's view is that retail investment should be focussed on the existing shopping area rather than encouraging new developments outside this area.

The parish church is St James, though many denominations are represented in the town. The churches include:

Brownhills has had strong links with the Methodist faith since the 19th century. The current Silver Street Methodist church was built in the 1960s when two other churches were compulsorily purchased and demolished to build noew town centre car parking under a council redevelopment scheme.[31] 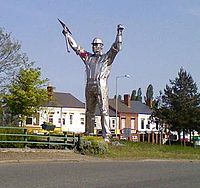 Jigger is a coal miner statue by John McKenna ARBS, and commemorates the town's mining tradition.[32][33] It is one of Brownhills' most prominent landmarks; a 46-foot stainless steel sculpture erected in May 2006 on a roundabout at one end of the High Street. The name was chosen in a competition; the winning name was Jigger after Jack "Jigger" Taylor who died when the roof of Walsall Wood pit collapsed in 1951.[34]

Chasewater lies on the edge of Brownhills, with the area surrounding it, which is designated as a country park. The reservoir supports a variety of activities including water-skiing, sailing, angling and bird watching.

Brownhills Common across the A5 is a designated nature reserve, where a wide variety of birds can be observed. Shire Oak Park is another reserve, approximately a mile from the town centre.[35] Holland Park, on the edge of the Common, has a skate park and multi-sports area

The town has what is reputed to be the oldest fingerpost in the United Kingdom.[13] 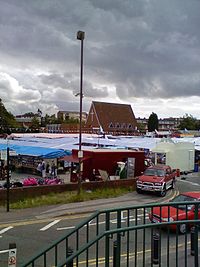 Brownhills market, with the Silver Street Methodist Church beyond

Brownhills holds an annual canal festival in June with stalls, entertainment and boat trips,[36] and there is an active Community Association which organises a range of events, including a weekend-long military display event in 2006.[37] The town has a weekly market which is popular but suffers from a reputation for the sale of counterfeit goods. In 2005 Trading Standards officers seized over £40,000 worth of fake goods in a raid on the market.[38] 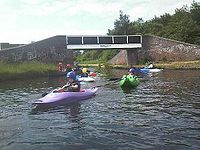 Canoeists on the canal near the bridge at Catshill Junction

The local community association organises a range of sporting activities for members of the public, including activities as diverse as badminton and kickboxing.[40]