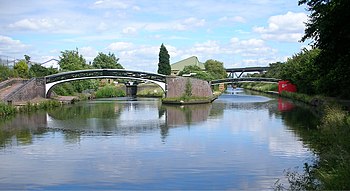 The vast number of canals cutting their network of ingenious routes between the towns of Birmingham and the Black Country, with their branch canals and linking arms are a remarkable achievement around which these towns and their industrial development have been shaped. They were acquired or built by the Birmingham Canal Navigations company and are collectively known as the Birmingham Canal Navigations. In this network the name Main Line was used to distinguish the main Birmingham to Wolverhampton route from the many other canals and branches

On 24 January 1767 a number of prominent Birmingham businessmen, including Matthew Boulton and others from the Lunar Society,[1] held a public meeting in the White Swan in the High Street, Birmingham[2] to consider the possibility of building a canal from Birmingham to the Staffordshire and Worcestershire Canal near Wolverhampton, taking in the coalfields of the Black Country. They commissioned the canal engineer James Brindley to propose a route. Brindley came back with a largely level route via Smethwick, Oldbury, Tipton, Bilston and Wolverhampton to Aldersley.[1][3]

On 24 February 1768 an Act of Parliament was passed to allow the building of the canal, with branches at Ocker Hill and Wednesbury[1] where there were coal mines. The Staffordshire and Worcestershire company was given the right to make the connection to their canal if the Birmingham company failed to do so within six months of opening.[3] On 2 March[3] Brindley was appointed engineer.[1] The first phase of building was to Wednesbury whereupon the price of coal sold to domestic households in Birmingham halved overnight.[2] Vested interests of the sponsors caused the creation of two terminal wharves in Birmingham. The 1772 Newhall Branch and wharf (now built upon) originally extended north of, and parallel to Great Charles Street. The 1773 Paradise Street Branch split off at Old Turn Junction and headed through the Broad Street Tunnel, turned left at what is now Gas Street Basin and under Bridge Street to wharves on a tuning fork-shaped pair of long basins: Paradise Wharf, also called Old Wharf. The Birmingham Canal Company head office was finally built there, opposite the western end of Paradise Street.[4]

By 6 November 1769, ten miles[1][3] had been completed to Hill Top collieries in West Bromwich, with a one-mile summit pound at Smethwick. Brindley had tried to dig a cutting through the hill at Smethwick but had encountered ground too soft to cope with.[3] The canal rose through six narrow (7-foot) locks to the summit level and descended through another six at Spon Lane. Water was brought from purpose-built reservoirs: Smethwick Great Reservoir (now built upon, holding 1514 locks' worth of water), another smaller pool at Smethwick (holding 500 locks),[2] and then from Titford Pool[3] to supply the summit level.[1]

Brindley died a few days later. The canal measured 22 miles and 5 furlongs (22⅝ miles),[1] mostly following the contour of the land but with deviations to factories and mines in the Black Country and Birmingham. A branch led to Matthew Boulton's Soho Manufactory.

The original Birmingham Canal was extremely successful but there was a problem with supplying sufficient water to the Smethwick Summit. However James Watt’s newly patented condensing steam engine, which was to revolutionise the industrial era, provided the answer: steam engines were constructed at either end of the Smethwick Summit to pump water used in the operation of the locks back to the summit.[1] The Smethwick Engine (5 June 1779) pumped water from the Birmingham side of the summit, and another, the Spon Lane Engine (April 1778)[2] operated from the Wolverhampton side.

There were problems of congestion at Smethwick caused by the time taken to traverse the locks and with supplying sufficient water to the summit level. John Smeaton was engaged to advise on a solution. He specified a 1,000-yard cutting through the top eighteen feet of the summit, eliminating three locks from each end, and doubling the capacity of the descent at Smethwick locks by building a parallel flight of three locks,[1] in use until the 1960s. The changes were made in two phases with a new cut to the side to remove two locks from each end and lower the summit by twelve feet, and then another parallel cut another six feet lower, removing another lock at each end and the provision of a parallel set of three locks at the Smethwick end.[3] In 1790, after 2½ years the cutting was completed. The canal was closed for only 14 days. The lowered summit was at the Wolverhampton Level and simplified water supply. Water was also pumped from several local coal mines. The Spon Lane engine was removed and sold but the Smethwick Engine continued to be used to pump used water from the Birmingham Level.

The Act allowed for branches to extend from the main line, and for private wharves and basins. In May 1821 the loop of the main line around Oldbury was bypassed by a straight cut, shortening the route between Birmingham and Wolverhampton.[6]

Over the next thirty years, as more canals and branches were built or connected it became necessary to review the long, winding, narrow Old Main Line. With a single towpath boats passing in opposite directions had to negotiate their horses and ropes. As traffic grew the locks at Smethwick Summit were still a constriction.

In 1824 Thomas Telford was commissioned to examine alternatives.[1] He famously travelled the route of the Old Line and reported the existing canal as:[2]

"… little more than a crooked ditch, with scarcely the appearance of a towing path, the horses frequently sliding and staggering in the water, the hauling lines sweeping the gravel into the canal, and the entanglement at the meeting of boats being incessant; whilst at the locks at each end of the short summit at Smethwick, crowds of boatmen were always quarrelling, or offering premiums for the preference of passage; the mine owners injured by the delay, were loud in their just complaints."

Telford proposed major changes to the section between Birmingham and Smethwick, widening and straightening the canal, providing towpaths on each side, and cutting through Smethwick Summit to bypass the locks, allowing lock-free passage from Birmingham to Tipton. Telford's proposals were swayed by the threat of a new Birmingham to Liverpool railway.[1] His suggestions were accepted and he was appointed chief engineer on 28 June 1824.

A year earlier he had built an improved Rotton Park Reservoir (Edgbaston Reservoir) on the site of an existing fish pool, bringing its capacity to 300 million gallons. A canal feeder took water to, and along, a raised embankment on the south side of the New Main Line to his new Engine Arm branch canal and across an elegant cast iron aqueduct to top up the higher Wolverhampton Level at Smethwick Summit. The reservoir also fed water to the Birmingham Level at the adjacent Icknield Port Loop.

Telford designed a cast iron bridge, the Galton Bridge, to span his cutting. It was cast in the Horseley Iron Works, as was the Engine Arm Aqueduct and many of the wide roving bridges.

In 1837, after Telford's death, a new section of his planned canal was opened together with the 360 yard Coseley Tunnel, complete with double towpath,[1] cutting out the long detour around Coseley and Wednesbury Oak, and therefore relegating it as the Wednesbury Oak Loop. As with many of the branch canals on the BCN, most of the Wednesbury Oak Loop became officially abandoned from 1954, but the northern stretch remains navigable to the British Waterways workshops at Bradley.[7]

By 1838 the New Main Line was complete: 22⅝ miles of slow canal reduced to 15⅝;[1] between Birmingham and Tipton, a lock-free dual carriageway. It was also called the Island Line as it was cut straight through the hill at Smethwick known as the Island.[1]

In 1892 the Smethwick Engine was replaced by a new pumping house between the old and new canals, just north of Brasshouse Lane Bridge in Smethwick.

Late in the 20th century, a pair of concrete tunnels near Galton Bridge were built to carry the Telford Way road.

Ryland Aqueduct, carrying the canal over the main A461 road at Dudley Port, Tipton, was rebuilt in the late 1960s. In 1990, its bare concrete structure was painted blue and white and included an image of a canal barge crossing an old-fashioned brick aqueduct.[8]