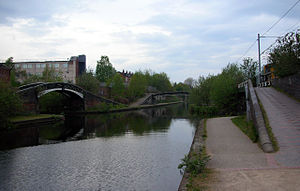 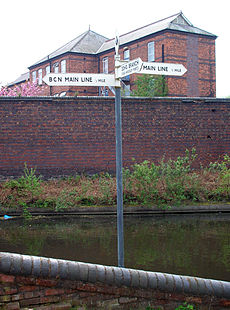 The Soho Loop is a two-mile section of the eighteenth-century Old BCN Main Line canal in Birmingham 18, Warwickshire, about 1¼ miles west of the city centre, which opened to traffic on 6 November 1769, and was bypassed in September 1827 by a straight ¾-mile section of the New BCN Main Line.[1] The Soho Loop is connected to the Icknield Port Loop on the opposite side of the New Main Line, which became redundant at the same time.

Much of the 110 acres of enclosed land is occupied by the 50 acres of Birmingham's City Hospital, and the canal itself serves private residential moorings at Hockley Port Basin via a 310-yd branch extending north-eastwards. This is all that remains of the former Soho Branch that once served Matthew Boulton's Soho Manufactory. There is pedestrian access to a tow path for the entire length of the outside of the loop, which skirts the southern boundary of Winson Green Prison and twice passes underneath the Stour Valley Railway. The Centre of the Earth environmental education centre is adjacent to the canal and has a long wharf frontage.