Ticknall is a small village and parish in Derbyshire. The population of the civil parish (including Calke) at the 2011 census was 642.[1] Situated on the A514 road, close to Melbourne, it has three pubs, several small businesses, and a primary school. Two hundred years ago it was considerably larger and noisier with lime quarries, tramways and potteries. Coal was also dug close to the village. Close to the village is Calke Abbey, now a National Trust property. The village is also home to Ticknall Cricket Club.

The old village of Tichenhalle is mentioned in the Domesday Book, and probably existed from Anglo-Saxon times. Ticknall was an estate village to Calke Abbey until late in the 20th century. It reached its heyday in the late 18th and early 19th centuries, when the limeyards and the brickmaking, tile and pottery industries were operating at maximum capacity. The population reached 1500, treble the present number of around 500. Since the neighbouring Calke Abbey changed its status in 1984 from long-standing private occupation by the Harpur-Crewe family to semi-public administration by the National Trust, much of the village has changed. The break-up of the former estate has meant the sale of cottages and building land, altering not only the randomness of the architecture, but also the dilution of the former feudal relationship between the villagers and their somewhat reclusive lords of the manor. The village has developed with examples of new buildings and renovations. 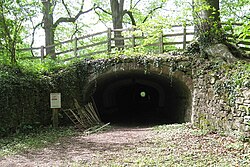 Ticknall Tramway tunnel, on the outskirts of Ticknall

Near the entrance to Calke Abbey is Tramway Bridge, which is now a Grade-II-listed structure. There is also a tramway tunnel, almost 140 yards in length, under the drive to Calke Abbey. The National Trust restored it in the 1990s and it can be traversed on foot. It was built in 1802 by the Derbyshire engineer Benjamin Outram to carry the former Ticknall Tramway and subsequently connect the brickyards and limeyards around the village to the Ashby canal at Willesley Basin. It was too costly to build the expensive locks that would have been required to bring the canal to Ticknall, so the tramway was constructed as a cheaper alternative. Although abandoned in 1915, the tramway can still be traced intermittently along its route, which passed through the estate of Calke Abbey where two tunnels were needed.

At the start of the 19th century the Ticknall Limeyards were operated by two different classes of people, namely freeholders and tenants. Some of the freeholders in the parish had their own limeyards while others were worked by tenants for the Harpur-Crewe and Burdett families. As the century progressed the freeholders went bankrupt for various reasons while the tenants of the Harpur-Crewe family gave up because of the high rents charged and general mismanagement of the limeyards.

The village boasts three pubs, The Wheel, The Staff of Life and the Chequers Inn. The latter dates from the 17th century.[2] On the lanes throughout the village can be found several water pumps. These sturdy and attractive cast iron devices were introduced into the village around 1914 by Sir Harper Crewe to, what was then, the estate village to provide fresh water.[3] Several of these unusual pumps still work and are still used by walkers.