The Battlefield Line Railway is a standard-gauge heritage railway in Leicestershire. It runs on a five-mile track from Shackerstone to Shenton, via Market Bosworth. Shenton is near Bosworth Field, (the location of Henry VII's conclusive victory of the Wars of the Roses immortalised in Shakespeare's Richard III), and this gives the railway its name. 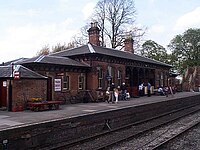 The railway runs steam and diesel-hauled trains every weekend from March to December, as well as a summer mid-week service on Tuesday, Wednesdays, Thursdays in July and August and Wednesdays in September; the latter is operated by their Heartlander diesel railcar service. They also operate special events: the Christmas Santa Specials (which operate on all weekends throughout December)and others throughout the year.

The railway used to be part of the London and North Western Railway and the Midland Railway, who operated the line jointly between Moira West Junction and Nuneaton. The first trains ran along this section in 1873. At Shackerstone station, there was once a junction where one section branched off towards Moira and Ashby and the other went towards Coalville Junction. In 1883, the Charnwood Forest Railway was opened, which extended the branch from Coalville Junction to Loughborough's Derby Road station, passing through the villages of Whitwick and Shepshed. In the 1923 Grouping, these lines were assigned to the London Midland and Scottish Railway. In 1931 the last scheduled passenger train went down the Charnwood Forest branch, with the line then only being open to freight and excursions until the 1960s. The Coalville Junction – Shackerstone section was dismantled and closed completely in 1964. The Ashby – Nuneaton line had its last passenger service in 1965, which was an enthusiasts' special, before British Rail pulled the rails up in 1970.

In its heyday, Shackerstone was a busy station, with steam trains doing the workings between Ashby and Nuneaton, whilst a railcar did the service between Shackerstone and Loughborough Derby Road.

The line was originally double track but was later singled. Confusingly, part of the line was called the Bluebell Line (the Charnwood Forest Line, Hugglescote to Loughborough Derby Road station; this line was only accessible via the ANJR).

The royal train now in the National Railway Museum went to Shackerstone on its first outing in December 1902. It conveyed King Edward VII, Queen Alexandra and Princess Victoria on their way to Gopsall Hall.

In 1973, to celebrate the centenary of the line, a small train of open wagons was hauled to Market Bosworth. Following the successful conclusions of the negotiations with British Rail, a start was made on track rearrangements which created run-round loops at both ends of the line and a number of sidings at Shackerstone.

In the 1980s, the Battlefield Line launched a campaign to extend their line to Shenton. This involved buying a mile and a half of track and in 1992 after a successful campaign, the inaugural service arrived, hauled by the appropriately named 0-6-0 tank engine "Richard III."

Leaving the platforms at Shackerstone, the first sight to be seen from the train is the old goods yard. This is situated on the right-hand side of the running lines. This first section of the journey is located on a climbing gradient which continues until the train is clear of the station limits. Near the goods yard, passengers can see the Station House (now a private residence). Approaching the signal box, the train passes the steam locomotive and carriage shed. The signal box, situated on the left of the train, is passed shortly, and once the driver has received the single line token, the train may proceed into the section. The signal box is the oldest Midland Railway Co. type one box still in operational use. Once past the shed the steam locomotive yard is in view, with the inspection pit and preparation area. Continuing further up the gradient, the train shortly passes the railway's DMU siding on which are usually stored the 2-car 'hybrid' set and the Bubblecar.

The train then passes under the first bridge which carries the road to Barton-in-the-Beans, and then passes into open farmland and countryside. Here, the track changes from the left-hand side of the trackbed, to the right-hand side. The railway curves to the left here on a long sweeping curve which takes the train under James Farm Bridge and on towards Hedley's Farm Crossing. It then crosses a separate foot-crossing, at each of which locomotives must give a warning whistle.

After the crossings, the track straightens for a while. On the left can be seen the Italianate style church tower of Carlton and shortly after this the Market Bosworth golf course can be sighted.

Market Bosworth and beyond

A local private airstrip can be seen on the left. The approach to Market Bosworth, three miles from Shackerstone, is on a sweeping right-hand curve. To the right of the train can be seen new housing developments whilst the left-hand side has countryside scenery. Market Bosworth station is soon approached and trains pass under the Station Bridge which carries the main road into Market Bosworth over the line. The train then stops in the platform for passengers to board or alight.

To the left-hand side of the train here there are usually stored locomotives or wagons. To the right can be seen the old buildings and signal box which used to control part of the operation of the station.

Once clear of Market Bosworth station, the train accelerates again towards Far Coton road bridge and then passes into a left-hand curve in a cutting. Out of the cutting, the train continues on a long, straight section of track on top of an embankment. To the right hand side can be seen Aqueduct Cottage and the actual Ashby Canal aqueduct beyond it. Trains slow as they cross the bridge which carries over the road between Shenton Village and Sutton Cheney. As the line curves to the right slightly, the train approaches Shenton Station, just over 4½ miles from Shackerstone.

The trains slow to enter the platform and the station pottery and car park can be seen to the right. The pottery is the only surviving part of the original station. The current station is the reconstructed Humberstone Road station from Leicester. To the left, the "Flag of the Boar" can be seen flying. Shenton station is a convenient starting point for walks in the Battlefield Country Park.

At the end of the line is a headshunt underneath an old cattle bridge. The small bridge was previously used to allow safe passage of farm traffic over the route of the old Ashby & Nuneaton Joint Railway.

The original A&NJR closed long before the formation of British Railways, but as very few suitable period carriages were preserved, BR Mark 1 coaches form part of all Battlefield Line passenger trains today. They are a renowned design of standardised rail stock, being both durable and high-capacity vehicles.