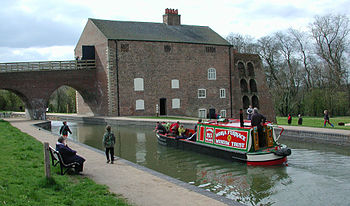 The Furnace and the Ashby de la Zouch Canal 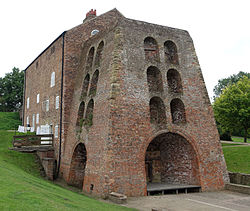 Moira Furnace is a nineteenth-century iron-making blast furnace in Moira in Leicestershire, on the banks of the Ashby-de-la-Zouch Canal. It was built by Francis Rawdon-Hastings, Earl of Moira in 1804: the earl also created the village around the furnace, which consequently bears his name or rather his title (from Moira in County Down).

The furnace buildings have been preserved by the council as a museum featuring lime kilns and craft workshops. It is a most important industrial monument, since it is remarkably well-preserved, and dates from a formative period of the Industrial Revolution.[1]

Moira Furnace was a coke-fuelled, steam-engine blown blast furnace for the smelting of iron from local iron ore, with an attached foundry for the manufacture of cast-iron goods.

The preserved furnace consists of the blast furnace, the attached bridgehouse, and the loading ramp. The blast furnace is the vertical structure with the blank arches at the lowest part of the site. The furnace within was supplied with raw materials (iron ore, coke, and limestone) by tipping them in through a charging port at the top, accessed from the bridgeloft. The loading ramp, which spans the Ashby Canal, allowed the raw materials to be raised into the bridgeloft, which comprises the top floor of the bridgehouse, the large building with the pitched roof behind the furnace. In the bridgeloft the materials were probably weighed and, maybe, mixed before being charged into the furnace.

Moira Furnace is one of the few remaining blast furnaces from this period of innovation - because it was a commercial failure. Had it been successful then it is highly likely that over time the site would have developed and the first furnace replaced.

In 1804, the Earl of Moira had the furnace constructed to take advantage of the iron ore and abundant coal which were present underground in the surrounding Ashby Woulds area owned by him. The location was chosen for its proximity to the Ashby Canal for transport, and the lie of the land which allowed the furnace to be built low down so the raw materials did not need raising very high.

However, this was a period of development in blast furnace design and some of the features of Moira Furnace do not appear to have been successful. It was brought into blast in 1806, and used intermittently until 1811, though the foundry remained in use until after 1844 by utilising iron brought in from elsewhere.[1]

The historical evidence shows that, although saleable iron was at times produced, over the period that the furnace operated it experienced continual problems. Documents mention bad design, poor construction, poor raw materials, and bad management, but many of the documents were written by individuals trying to divert the blame from themselves. The furnace was abandoned with its final charge still inside, partially smelted. Metallurgical examination has shown a high sulphur content in the raw materials, which may have been a contributory factor, and the chimney shows signs of severe overheating, indicating a design fault or operating problem.[1]

The attached foundry continued to be used for some years, using brought-in pig iron, though it was demolished later in the 19th century. Meanwhile, the bridgehouse and the engine house, which was a separate building to the side of the furnace, were converted to dwellings and survived. However, by the 1970s they had become derelict and affected by mining subsidence and the engine house was demolished. After pressure by Philip Riden and from Leicestershire Industrial History Society, the furnace and bridgehouse were scheduled as an ancient monument. The site was acquired by the council in 1981, who sponsored a Community Programme to restore the site and develop it as a museum and country park.[1]

Inside the bridgehouse there is now a museum, operated by the Moira Furnace Museum Trust, which is open regularly. It has information boards and displays about Moira Furnace and the industrial heritage of the area.