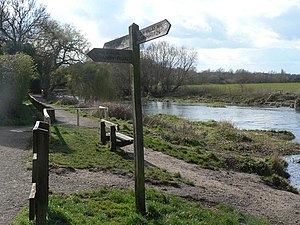 The Stour Valley Way at Muscliff

The Stour Valley Way is a 64-mile long-distance footpath along the Dorset Stour passing through four counties: Wiltshire, Somerset, Dorset and Hampshire.

The path uses public rights of way and permitted paths to follow the course of the River Stour, beginning at Stourton in Wiltshire, then travelling south-eastwards through Dorset to and finally across to Hengistbury Head near Christchurch in Hampshire.

Waymarker for the Stour Valley Way

The path begin at the head of the river at Stourton, in a finger of Wiltshire, soon passing into Somerset, then at beyond White Cross briefly re-entering Wiltshire (then re-crossing to the Somerset bank of the river where it intersects the east-west Monarch's Way footpath). It enters Dorset north of Bourton.

From Holdenhurst in Hampshire, the path is largely hemmed-in, with the suburbs of Bournemouth to the west and those of Christchurch to the east. There are ferry crossings between Hengistbury Head and Christchurch town quay or Mudeford quay.

The path has two alternative sections which can be used to form circular walks: one to the south-west of Wimborne, and the other to the southwest of Bournemouth Airport.

The footpath is waymarked and is shown on Ordnance Survey maps.