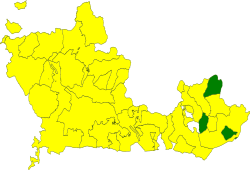 Cookham Hundred is one of the hundreds of Berkshire. It is situated in the east of the county, comprising the following ancient parishes:

The parishes are geographically separate, and Sunninghill additionally has a detached part on the Surrey border, leaving the hundred in four parts. Cookham itself has a northern boundary with the Thames, across which lies Buckinghamshire; the western boundary is with Beynhurst Hundred; and to the south lies Bray Hundred. This part includes the northern parts of Maidenhead, the rest of which is in Bray Hundred. The Binfield part of the hundred has a northern boundary with Beynhurst Hundred; with Wargrave Hundred to the east and north-west; a detached part of Wiltshire lies to the west; and Ripplesmere Hundred is to the south. Sunninghill is completely surrounded by Ripplesmere.