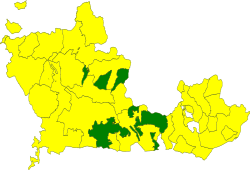 Reading Hundred is one of the hundreds of Berkshire. It is scattered into no fewer than ten parts - a legacy of its origin as the lands owned by Reading Abbey. At the time of the Domesday Survey the hundreds of Reading and Theale were both included in that of Reading. The hundred was granted by Henry I to Reading Abbey at its foundation, which led to the hundred's reconstruction into the manors and dependent manors, held by the abbey in demesne in Berkshire.