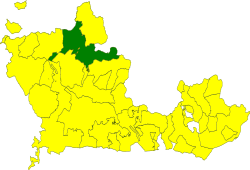 Ock Hundred is one of the hundreds of Berkshire, named after the River Ock which flows through it. It is situated in the north of the county, bounded to the north and east by Oxfordshire; to the north-east by Hormer Hundred; to the west by Ganfield Hundred; and to the south-west by Wantage Hundred. The south-eastern boundary is mostly with Moreton Hundred, with a short section with part of Reading Hundred.