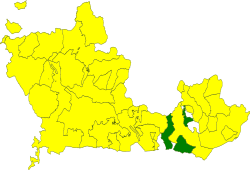 Charlton Hundred is one of the hundreds of Berkshire. It is situated in the eastern part of the county, bounded to the south by Hampshire. Sonning Hundred forms the majority of Charlton's other boundaries, although it also borders Reading Hundred to the west and Wargrave Hundred to the east. The hundred also encompasses detached parts of Wiltshire. Charlton Hundred had a population of 53,179 in 2011, rising to 62,270 if detached parts are disregarded.