Winter Hill is in Lancashire, a high hill on on Rivington Moor in the midst of the county, clearly visible from by the industrial towns of Blackburn, Chorley, and Bolton. It rises to 1,496 feet above sea level.

Winter Hill is part of the West Pennine Moors and is a popular walking area. Apart from leisure-time, the hill has seen industrial mining and a darker side in its history too.

Atop the hill stands the Winter Hill Television Mast, taking advantage of its prominent position, transmitting to a large part of Lancashire and the north-west, while several other telecommunication masts and towers cluster around the summit and hillside. Lancashire Constabulary was the first to use the site for one of their base stations in 1950; they had to build the road and it is said to have been built by policemen.[1]

Paths to the summit lead from Belmont and Rivington, as well as Horwich and Blackrod. The summit can be reached by way of a short walk from the top of a road pass a little over a mile west of Belmont. The hill is a distinctive feature on the skyline for most of Chorley and its surrounding suburbs and further afield due to its unusual shape. 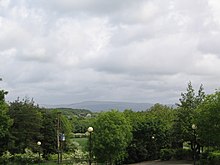 The summit offers views over the conurbations of south Lancashire, including Manchester city centre, the Civic Centre in Oldham, Salford, Werneth Low, Wigan and Bolton. In clear weather conditions, it also offers views of, Liverpool, Southport and the Irish Sea, of Blackpool Tower, Jodrell Bank Observatory and out to Snaefell on the Isle of Man. The Lake District fells, Snowdonia and the Peak District may be in view. Almost uniquely in the United Kingdom, on a clear day the summit offers a view of four national parks; The Lake District, Yorkshire Dales, Peak District and Snowdonia.

The top of the hill has not always been bare as it is today. It was once covered by woodland that may have been destroyed by fire[3] and it is thought that the hill was inhabited, though no remains have been found.[4] There is a Bronze Age round cairn dating from 1600–1400 BC on the hill.[5] A stone axe dating from 2500BC has also been found in the area in the River Douglas in Tigers Clough.[6] A flint knife and two arrowheads were also discovered.[6]

Two burial mounds are located near the peak of the hill, dating from the Bronze Age. On March 24, 1957, two men discovered "curved lines of stones" sticking out of the peat that formed a two feet high wall. The wall surrounded a raised area located in the middle of it.[6] In July 1958, a group from the University of Manchester excavated the central mound only to find it had been excavated 250 years earlier.[6] The site was thought to have originated from 1500BC in the Middle Bronze Age.[6]

The second mound was found higher up than the previous mound, on the southern edge of Noon Hill. The site was excavated in August 1958 by the Bolton & District Archaeological Society, revealing two lines of stones and two piles of human remains.[7]

Two memorial cairns on the hill are known as Wilder Lads or Two Lads. There are differing opinions on why they were erected. Details of the site were recorded in 1776 and 1883. Thomas Hampson in 1883 described 'Two Lads' as the graves of two children of a Saxon king, Edgar and recorded that Winter Hill was previously known as Edgar Hill.[8] The cairns could mark the site on which two boys lost their way on the moor and died of exposure in a snowstorm.[9]

On 9 November 1838 George Henderson, a Scottish merchant walking over the hill from Bolton to Blackburn, was murdered by gunshot along the road directly opposite where the television station now stands. James Whittle, a 22-year-old collier from Belmont, was brought to court and found guilty of murder. However, he was found not guilty at a second trial in Lancaster. There is an iron post with a plaque on the hill in memory of the victim erected in 1912, replacing a tree that was earlier planted opposite the television station.[10] This is known as Scotsman's Stump.

On 27 February 1958, a Silver City Bristol 170 Freighter (G-AICS) travelling from the Isle of Man to Manchester crashed into Winter Hill several hundred yards away from the transmitter.[11] Thirty-five people died and seven were injured.[12] The weather that night (note: the ICAO report [13] states that the accident occurred at 9:15 in the morning) was so severe that none of the engineers working in the ITA transmitting station were aware of the crash.[14] Several feet of snow hampered rescue efforts, and a snow cat vehicle had to be diverted from the A6 to cut a path for emergency vehicles though the track had been cleared by people using spades by the time it arrived. A documentary was made about the disaster.[15]

There have been several other aircraft crashes around Winter Hill. A two-seater aircraft crashed there in the 1920s.[16] During Second World War an American Fairchild UC-61 Forwarder (41-54885) of 5th Air Depot Group crashed on 7 August 1942.[16] In the following year, on 12 November 1943, the crew of a Wellington Bomber (Z8799) from 28 Operational Training Unit, flying from Blackpool to Manchester, were killed when it crashed just to the North of Winter Hill, on Hurst Hill, Anglezarke Moor.[16] The following month, 24 December 1943, an Airspeed Oxford (BM837) of 410 Squadron crashed on the hill.[16] Other crashes have included several Spitfires, Hurricanes and a Gloster Meteor which crashed in 1953.[16] In September 1965 a RAF De Havilland Chipmunk flew into the hill in cloud, without serious injury to the crew.[16] The last crash occurred in October 1968 when a Cessna 172 force-landed between Winter Hill and Rivington Pike.[16]