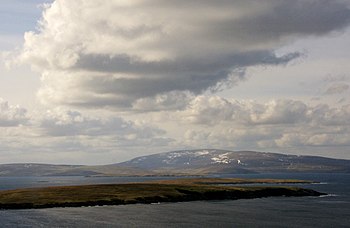 View over Uynarey (with Brother Isle behind)

Uynarey is one of the uninhabited Shetland islands lying in Yell Sound which separates the islands of Yell and Mainland, Shetland at HU439808.

Uynarey lies just to the north of Bigga, and east of Brother Isle. It is an RSPB reserve.[1]

The name appears to come from the Norse for "venerated island", though the reason is unknown.

The island is approximately half a mile long; a small, steep-sided island and wholly uninhabited by man. There is a small bay in the east - Haa Geo, and a cave in the west. The north end is called "the Niv".

The geology is moine gneiss and quartzite.