Brother Isle is a small, uninhabited island of Shetland. It lies in Yell Sound, between the islands of Yell and Mainland. It is 99 acres in size.

It is sometimes stated that the "Brother" in the name refers to Culdees oe papar who were frequent inhabitants of the smaller islands. However, in this case there is no apparent evidence for this claim nor for any papar on this isle and it would appear to be merely folk etymology. The true origin of the name is more likely the Old Norse, in which it was known as breiðare øy, meaning "Broad Beach Island"

The island's rock is "undifferentiated moine gneiss and quartzite."[1] 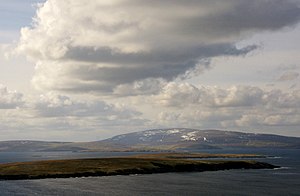 Uynarey with Brother Isle beyond

At only 99 acres and surrounded by tidal rips which make landing difficult, it would seem unlikely that the island has ever been inhabited. However, it is said locally that Brother Isle was inhabited until the 1820s, latterly by brothers with the surname Tulloch. This has led to the assumption that the island's name referred to them.